It is common knowledge that airlines in the United States are roaring back to life after reeling at length under the coronavirus pandemic since early 2020. This resurgence, attributable to the uptick in air-travel demand (particularly for leisure) with an increasing number of Americans getting the coronavirus jabs on a daily basis, is well-reflected in the stock movement of major airline companies so far this year. 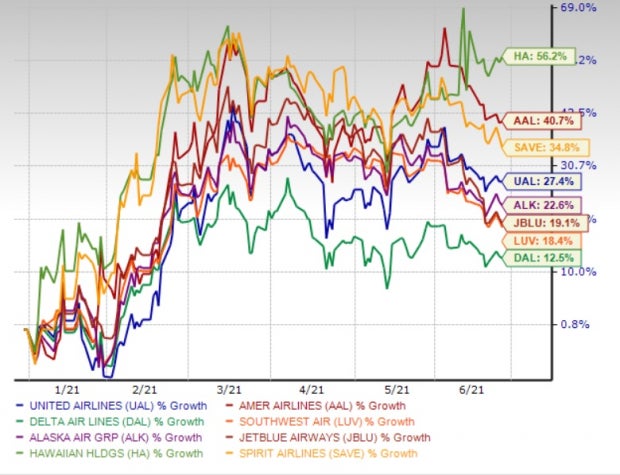 After being administered COVID-19 shots, people are naturally feeling safer to take to the skies as the fear of catching the infection from a fellow passenger is on the wane. The healthy state of air travel in the United States can be gauged from the Transportation Security Administration’s screening of 2.1 million people last Sunday i.e. Jun 20. This was the highest reading since early March 2020.

In response to the uptick in air-travel demand in the United States, airline heavyweights in the country are looking to recall pilots to meet the anticipated demand swell. Per a Reuters report, Delta intends to recruit more than 1,000 pilots by next summer. Per the update, the presently Zacks Rank #3 (Hold) Delta, expects the volume of leisure travel in the United States to return to pre-pandemic levels in the current month.

Southwest Airlines also aims to hire pilots by this year-end. With the Boeing 737 Max 7 jets likely to join the carrier’s fleet next year, the requirement for pilots is naturally high. Notably, this Dallas-based low-cost carrier currently has roughly 500 pilots participating in its coronavirus-induced voluntary leave program.

With air-travel demand picking up, U.S. carriers are broadening their network by adding routes. Apart from additions to tourist-friendly spots, the airlines are recommencing services on the routes that were rendered non-operative by the coronavirus-led low air traffic.

JetBlue also recently bolstered its international network by unveiling a service to the tourist-favorite Mexican destination of Los Cabos from both Los Angeles International Airport and New York’s JFK Airport.

Joining this frenzy of route additions, Spirit Airlines recently announced that it will operate non-stop flights from Manchester-Boston Regional Airport to four Florida cities, namely Fort Lauderdale, Fort Myers, Orlando and Tampa from October. We remind investors that owing to improving air-travel demand, the likes of JetBlue and Spirit Airlines recently provided a bullish outlook on key metrics for the June quarter.

The above write-up clearly suggests that the future of U.S. airlines is rosy. Boosted by an expanded traffic, we expect airlines, which were hard hit by the coronavirus pandemic due to dwindling passenger revenues, to become investor favorites once again.