Valued at $136.5 million, the contract is expected to be completed by April 2024. The majority of work related to the deal will be performed in Louisville, KY; El Segundo, CA; Pittsburgh, PA; Williston, VT and Tucson, AZ.

The deal will cater to the U.S. Navy and government of South Korea. It includes options, which, if exercised, would bring the cumulative value of this contract to $344 million and in that case, work will continue through September 2026.

Significance of the MK 15 CIWS

Raytheon’s MK 15 Phalanx CIWS is a fast-reaction, rapid-fire, 20-millimeter, terminal defense gun system, which has been designed to engage anti-ship cruise missiles and fixed-wing aircraft at short range. It provides ships of the U.S. Navy with an inner layer point defense capability against anti-ship missiles, aircraft and littoral warfare threats that can infiltrate other fleet defenses.

Notably, the Phalanx weapon system is installed on all U.S. Navy surface combatant ship classes and on those of 24 allied nations. This evidently reflects the strong demand that the Phalanx weapons system enjoys in the U.S. defense space. The latest contract win is another instance of the same.

Considering the aforementioned discussion, it is imperative to mention that Raytheon Missiles & Defense (RMD) is a leading designer, developer, integrator producer, and sustainer of integrated air and missile defense systems. Impressively, the unit serves as a prime contractor or major subcontractor on numerous missile and related programs with the U.S. Department of Defense (DoD).

Its expertise in manufacturing combat-proven missiles has been consistently boosting performance of the RMD unit. The latest contract win will further bolster this unit’s performance in the coming days.
Budget to Boost Prospects

The U.S. fiscal 2022 defense budget proposal has provisioned $20.4 billion for investments in missile defense. This should enable Raytheon Technologies to clinch more contracts related to missile defense systems and associated services like the latest one, considering the company’s proven expertise in varied missile systems. In fact, the DoD has requested investment worth $609 million for purchasing Raytheon’s long-range stand-off missile.

Shares of the company have gained 47% in the past year compared with the industry’s 45.7% growth. 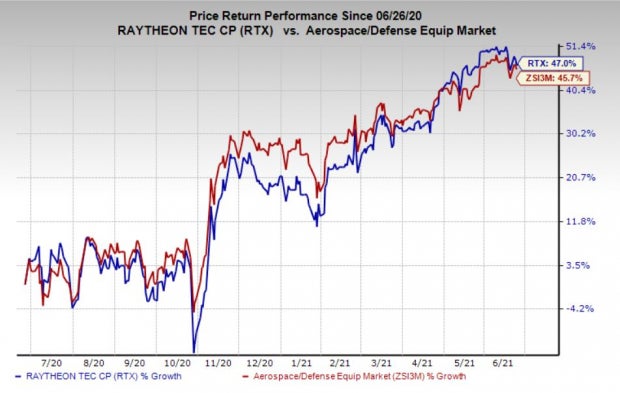