Rationale Behind the Collaboration

Per estimates, there are approximately 25 million Americans currently affected by a rare and often undiagnosed genetic condition. In studies into rare diseases, conventional techniques for whole-genome and whole-exome analysis are based on SRS. This typically leads to identification of a causal variant in few cases (less than 50%).

However, PacBio’s Single Molecule, Real-Time or SMRT Sequencing technology can be utilized to generate highly accurate long-reads, known as HiFi reads. Clinical researchers have established that disease-causing structural and small variants can be detected using the SMRT Sequencing technology, which were missed by short-read sequencing platforms. The study has been developed to assess the rate at which HiFi sequencing detects overlooked causal variations.

The latest research is expected to provide additional insight into the identification of potential disease-causing genetic variants in children. Notably, this patient pool includes children who do not receive a diagnosis with current sequencing methods, but are potentially suffering from genetic diseases as understood from their symptoms.

Per PacBio’s management, the latest research collaboration with RCIGM is likely to use HiFi Sequencing data on some of the most difficult cases of rare pediatric disease, thereby providing insights to end the diagnostic journeys of such children.

Per a report by Research And Markets published on GlobeNewswire, the global whole-genome and exome sequencing market was valued at $497.1 million in 2018 and is projected to grow over $7,303 million by 2029 at a CAGR of approximately 26.9%. Factors like rising prevalence of genetic disorders and various types of cancer are expected to drive the market.

Given the market potential, the collaboration seems to have been timed well.

PacBio has been witnessing a slew of developments across its business over the past few months.

The company, in April, reported solid revenues in the first quarter of 2021 where it placed 41 Sequel II/IIe systems. During the first quarter, PacBio confirmed deploying Sequel IIe systems at Laboratory Corporation of America Holdings (LH - Free Report) or LabCorp to scale the latter’s capabilities to sequence SARS-CoV-2.

The same month, PacBio announced the availability of HiFi Sequencing and Software v10.1 Release on the Sequel II and Sequel IIe Systems. 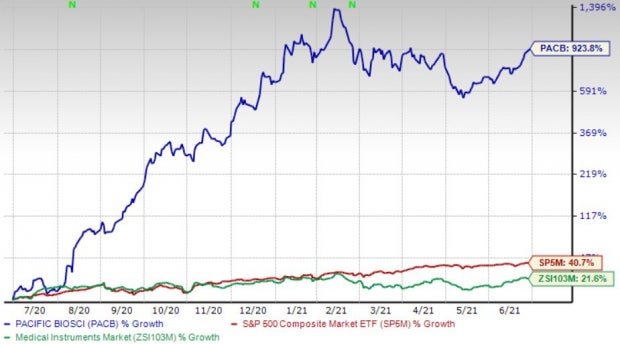