Canadian Solar Inc. (CSIQ - Free Report) has further expanded footprint in Japan’s renewable energy space after receiving an 86 megawatt peak (MWp) contract in the country’s 8th solar energy auction. This contract includes three projects that are expected to start commercial operations between 2024 and 2026. All these projects will enter into a 20-year power purchase agreement with Tohoku Power Electric Company at a weighted average rate of 9.8 cents per kWh (¥10.77). This in a way assures long-term earnings for Canadian Solar.

The company has vast experience in operating in Japan’s energy market, and has successfully participated as well as won contracts in Japan's feed-in-tariff auction program. These new projects will add to its 450 MWp of utility-scale projects that are operational or under construction in Japan.

Canadian Solar caters to a geographically-diverse customer base spread across key markets in the United States, China, United Kingdom and Canada as well as emerging markets of Brazil, India, Mexico, Italy, Germany, South Africa, and the Middle East.

After the nuclear power plant accident in 2011, the Government of Japan changed its energy policy, with focus on generating more electricity from clean energy sources like natural gas and renewables. Last year, the Japanese Government unveiled plans of reducing greenhouse gas emissions to net zero by 2050.

Japan will achieve its carbon neutrality target by cutting down the usage of fossil fuels like coal and adding more clean sources in the energy generation portfolio. Per Japan’s Ministry of Economy, Trade and Industry report, Japan's coal-fired power generation will drop to 26% of its energy mix in the fiscal year 2030-31, indicating a decline from 31% in fiscal 2019-20.

A report from RTS Corporation suggested action plans for more than 150 GW of solar PV deployment in Japan by 2030. This will create more opportunities for solar operators like Canadian Solar to further increase presence in Japan and gain from the country’s carbon neutrality goal. It is quite evident that Canadian Solar will continue to apply in Japan’s future solar auctions and win more contracts to further spread operations in the country. Another leading global provider of comprehensive PV solar energy solutions, First Solar (FSLR - Free Report) is involved in a few solar projects in Japan. Huge demand in Japan is expected to create more opportunities for this company.

The solar market in Japan is large enough to accommodate energy operators like TotalEnergies (TTE - Free Report) in the clean energy space. TotalEnergies is also expanding renewable operation in Japan through its units, Total Solar and SunPower Corporation (SPWR - Free Report) . At present, the company has more than 100 MWp of utility-scale projects that are operational or under construction in Japan.

In the past month, Canadian Solar’s shares have gained 19% compared with the industry’s growth of 24.3%. 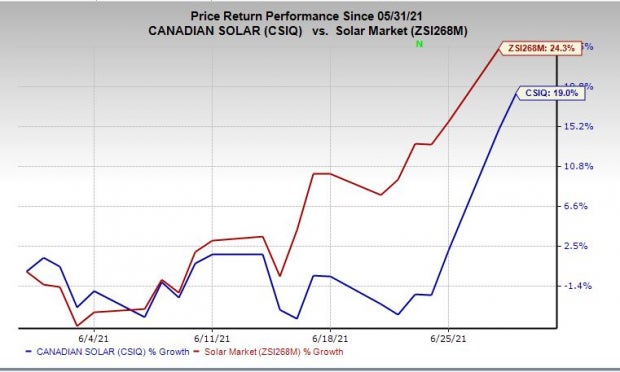