Here's Why You Should Hold Euronet (EEFT) in Your Portfolio

Euronet Worldwide, Inc. (EEFT - Free Report) has been gaining momentum for quite some time now on the back of its strategic expansions, portfolio enhancement, segmental contributions and rising digital transactions.

This currently Zacks Rank #3 (Hold) company managed to deliver a trailing four-quarter surprise of 61.85%, on average, beating estimates in three quarters while missing the mark in one.

Euronet has been gaining from surging digital transactions over the last few quarters. In the first quarter of 2021, it witnessed more than 125% and above 80% year-over-year digital transaction growth in money transfer and epay, respectively. Further, the company took various measures to boost its digital presence in different geographies through its mobile application and real-money transfer.com. In the March quarter, it launched the app in Lithuania and forged a partnership with Bret Bank in France to pay pensions to the French expats.

The company’s strong inorganic growth strategy is impressive. Several initiatives, such as the ATM network participation agreements and the unveiling of card-issuing products bode well. The company also agreed to buy Piraeus Bank's merchant-acquiring business in Greece. The deal, expected to close in late 2021, will boost its omnichannel payment strategy.
Further, in the first quarter, Euronet signed an agreement with the Bank of the Philippine Islands to take over 300 of the latter’s existing ATMs. In addition, it tied up with biggies like Google, Sony, Microsoft, etc. to expand its network. In Philippines, it also started Netflix distribution through Shopee and Touch Pay.

In the first quarter, the financial services provider entered the digital channel space of India by launching Google Play recharge code distribution through Flipkart, which is the country's largest e-commerce platform. All these initiatives poise the company well for growth.

On the back of its strong segments and expansion, Euronet has been witnessing a healthy revenue stream over the past many years. Although the same decreased to some extent due to the pandemic, it bounced back 12% year over year in the opening quarter of 2021. We are hopeful that the company’s top line will continue delivering strong numbers on the back of its solid segmental results, a slew of products and service launches as well as the new and exciting geographic options.

Euronet’s EFT Segment is witnessing continued robust growth owing to its steady focus on deploying more devices to the extended markets and its ability to develop an advanced technology for new products at both ATMs and POS terminals for optimizing and enriching the customer experience. Although the same is under persistent pressure due to lower high-value cross-border transactions across Europe and the Asia Pacific, we expect it to bounce back as things get back to normalcy.

The company has been gaining traction from its Money Transfer segment for sometime now. In 2020, growth was witnessed despite the COVID-19 pandemic on the back of higher cross-border transactions. In the first quarter, total revenues of $324.9 million rose 22% year over year. Euronet expanded its mobile app and online capabilities to reach several countries.

Ria Money (Money Transfer) is consistently partnering with post offices around the world. Kroger selected it as a second provider of money transfer services within its approximately 2000 locations in the United States. Ria Money’s international fund transfer grew 16% year over year in 2020, which is pretty impressive. In the March quarter, the company saw international outbound transaction growth of 27%. The World Bank’s projection was of a 7% downfall. The segment also witnessed a whopping 125% rise in its digital transactions. Ria Money collaborates with Romania's national postal service operator to expand its presence in the European country.

However, it is witnessing a constant escalation of operating expenses over the years, inducing margin contraction.

Shares of this company have gained 39.3% in the past year, outperforming its  industry’s growth of 7.8%. You can see the complete list of today’s Zacks #1 Rank (Strong Buy) stocks here. 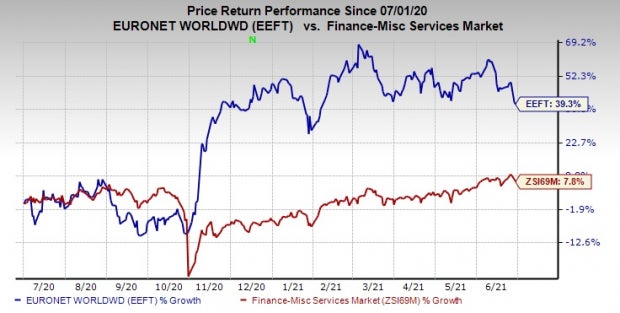 Virtu Financial, XP Inc. and Moodys managed to deliver a trailing four-quarter surprise of 30%, 30% and 22.3%, respectively, on average.

Why Should You Retain RenaissanceRe (RNR) in Your Portfolio?