The coronavirus pandemic, which was aptly described in April 2020 as the “the worst financial crisis in aviation history" by United Airlines’ (UAL - Free Report) former CEO Oscar Munoz, caused an untold misery to airlines last year. With air-travel demand touching a nadir, most airline companies incurred losses in each of the four quarters of 2020. Reflecting the hardships, the Zacks Airline industry declined 26.4% last year. 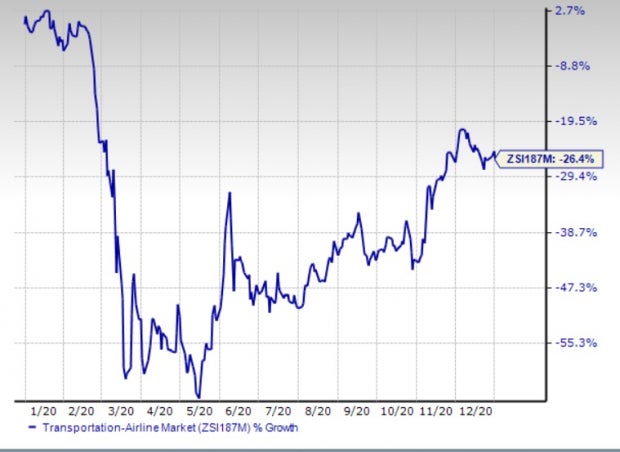 However, the industry participants’ fortunes changed with the advent of 2021. Wide-spread vaccinations instilled confidence in people to fly once again without the fear of contracting the infection from a fellow-traveler. As a result of the uptick in air-travel demand (particularly for leisure), carriers including Delta Air Lines (DAL - Free Report) , Spirit Airlines (SAVE - Free Report) and JetBlue Airways (JBLU - Free Report) announced plans to add/resume operations on several routes to meet the demand surge. Also, European carrier Ryanair Holdings (RYAAY - Free Report) is seeing a swell in passenger count despite the coronavirus-led travel restrictions, per a  Reuters report.

Moreover, in the United States, the Transportation Security Administration screened more than two million people in not less than 10 days during June (considering the data until Jun 29). In fact, TSA screened 2,167,380 people last Sunday i.e. Jun 27, 2021. This was the highest reading taken since Mar 5, 2020. Betterment of the scenario is well-reflected in the Zacks Airline industry’s growth of 6.9% year to date. 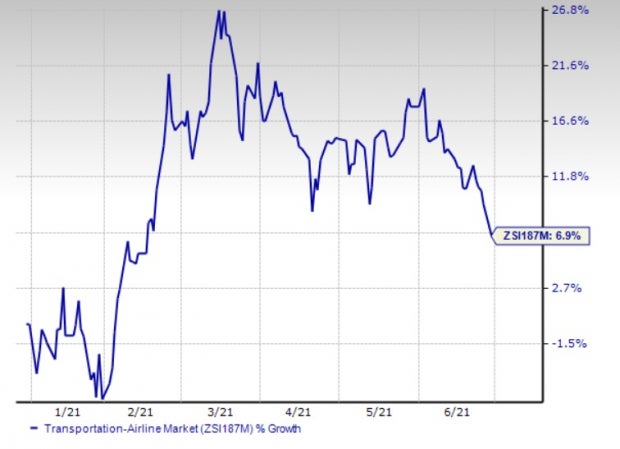 While the weakness pertaining to business travel is unlikely to disappear soon, overall air-travel demand is likely to continue improving in the second half of 2021, driven by leisure travel. The fact that the expectation of a recovery is not only restricted to the United States is clear from the fact the European carrier Ryanair's recent addition of 200,000 seats on flights from the United Kingdom to Malta and the Balearics (Ibiza and Palma) for July, August and September.

This follows the U.K. government’s decision to include these islands on the green list for travel that allows flyers to visit these sites without having to quarantine (provided they are declared COVID negative) themselves on their return. The relaxation is effective today.

Even in Latin America, air-travel demand is northbound on the back of ramped-up vaccination programs. This is evident from the fact that consolidated traffic at Azul (AZUL - Free Report) improved 12.4% in May from the April tally. At another Latin American carrier Gol Linhas (GOL - Free Report) , May traffic surged 65% month over month.

Riding on such an improved scenario, Gol’s outlook for the second half of 2021 seems rosy. The carrier, currently carrying a Zacks Rank #3 (Hold), expects net operating revenues for the latter half to be approximately R$6 billion, much higher than the second-quarter estimate of roughly R$1 billion.

The above write-up clearly suggests that things are on the mend as far as airlines are concerned and the second half of the year should see this momentum to continue on the back of improvements witnessed in first half of the year. We therefore highlighted three airline stocks, each presently carrying a Zacks Rank of 3, that investors should keep tabs on.

United Airlines: In response to a better air-travel demand, United Airlines plans to add in excess of 400 daily flights to its July schedule. The airline expects to operate 80% of its pre-pandemic U.S. schedule in the month as summer travel bookings soar 214% from the 2020 levels. The company’s cost-control initiatives are supporting its bottom line. Owing to an improved air-travel demand scenario, the Zacks Consensus Estimate for 2021 is currently pegged at a loss of $14.15 per share, narrower than the loss of $14.26 estimated for the stock 60 days ago.

Southwest Airlines (LUV - Free Report) : Restoration of leisure-travel demand is a huge plus for this Dallas-based carrier. To meet the anticipated demand upturn in the latter half of the year, Southwest Airlines recently announced a pay hike for its hourly employees. The impending increment, which will be effective Aug 1, is aimed at retaining its existing employees as well as attracting new personnel.

Owing to bloated bookings, aided by an upswing in air-travel demand, the Zacks Consensus Estimate for 2021 is currently pegged at a loss of $1.29 per share, narrower than the loss of $1.47 estimated for the stock 60 days ago.

Boosted by higher bookings, attributable to a spike in air-travel demand, the Zacks Consensus Estimate for 2021 currently stands at a loss of $2.50 per share, narrower than the loss of $2.86 expected for the stock in the past 60 days. 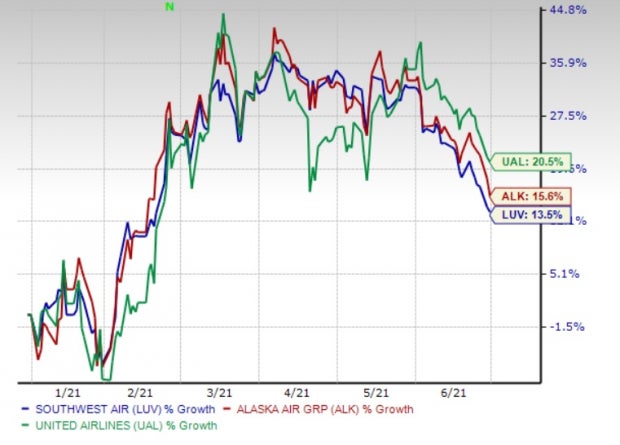