It was a busy week for the volatile biotech sector with quite a few pipeline and regulatory updates. New drug approvals also continue to be in focus along with news related to vaccines for COVID-19.

Exelixis Down on Study Update: Shares of Exelixis, Inc. (EXEL - Free Report) declined after it announced mixed data from the ongoing phase III study, COSMIC-312. The study is evaluating Cabometyx in combination with Tecentriq (atezolizumab) as compared to Nexavar (sorafenib) in patients with previously untreated advanced hepatocellular carcinoma (HCC), a type of liver cancer. Data from the study showed that it met only one of the primary endpoints, demonstrating significant improvement in progression-free survival (PFS) at the planned primary analysis.

However, a prespecified interim analysis for the second primary endpoint of overall survival (OS) did not reach statistical significance. Hence, based on these preliminary OS data, Exelixis anticipates the probability of reaching statistical significance at the time of the final analysis to be low. Nevertheless, the study will continue as planned to the final analysis of OS and results are expected in early 2022.

Moderna’s Vaccine Updates: Moderna, Inc. (MRNA - Free Report) announced encouraging new results from in vitro neutralization studies of sera from individuals vaccinated with its COVID-19 vaccine. Data showed that vaccination with mRNA-1273 can produce neutralizing titers against all variants tested. These included additional versions of the beta variant (B.1.351, first identified in South Africa), three lineage variants of B.1.617 (first identified in India), including the kappa (B.1.617.1) and the delta variants (B.1.617.2); the eta variant; and the A.23.1 and A.VOI.V2 variants. Data from neutralization studies demonstrated that a modest reduction of 2.1-fold in neutralizing titers against the delta variant compared to the ancestral strain (D614G).

Concurrently, Moderna announced that the government of India has issued a registration certificate and permission to import its COVID-19 vaccine for restricted use in an emergency situation.

The patients targeted for this indication must have metastatic NSCLC or locally advanced NSCLC and not be a candidate for definitive chemoradiation. The EC also approved the drug for the treatment of adults with locally advanced or metastatic basal cell carcinoma (BCC) who have progressed on or are intolerant to a hedgehog pathway inhibitor (HHI). BCC is a common type of skin cancer.

The companies also announced that the European Medicines Agency (EMA) will update the summary of product characteristics (SmPC) for asthma drug, Dupixent (dupilumab), adding long-term safety results for adults with moderate-to-severe atopic dermatitis based on a positive opinion by the Committee for Medicinal Products for Human Use (CHMP).

The CHMP of the European Medicines Agency (EMA) has given a positive opinion recommending the approval of chimeric antigen receptor (CAR) T cell immunotherapy, Abecma (idecabtagene vicleucel; ide-cel). The committee recommended granting Conditional Marketing Authorization to Abecma for the treatment of adult patients with relapsed and refractory multiple myeloma who have received at least three prior therapies, including an immunomodulatory agent, a proteasome inhibitor and an anti-CD38 antibody, and have demonstrated disease progression on the last therapy.

Concurrently, the CHMP also recommended the approval of Opdivo for the adjuvant treatment of adult patients with esophageal or gastroesophageal junction (GEJ) cancer who have residual pathologic disease following prior neoadjuvant chemoradiotherapy (CRT).

Intellia Surges on Study Data: Shares of Intellia Therapeutics, Inc. (NTLA - Free Report) have been on the upward trajectory since Jun 26, following the announcement of positive data on NTLA-2001, an investigational CRISPR therapy for transthyretin (ATTR) amyloidosis. The candidate is being evaluated in people living with hereditary transthyretin amyloidosis with polyneuropathy (ATTRv-PN). The company and partner Regeneron announced interim data from an ongoing phase I study of their lead in vivo genome editing candidate, NTLA-2001.

Altimmune Down on Vaccine Update: Shares of clinical-stage biopharmaceutical company, Altimmune, Inc. (ALT - Free Report) , plunged after it provided an update on its AdCOVID investigational vaccine for the prevention of COVID-19. The vaccine was well tolerated but did not stimulate an adequate immune response in healthy volunteers. The immunogenicity data demonstrated lower than expected immune responses for each of the immune parameters tested.

Although antibodies were detected that bound the SARS-CoV-2 Spike protein and neutralized the virus in a subset of subjects, the magnitude of the response and the percent of subjects responding to AdCOVID were substantially lower than what had been demonstrated for other authorized vaccines for emergency use. Consequently, Altimmune is discontinuing further development of AdCOVID beyond the completion of this phase I study. 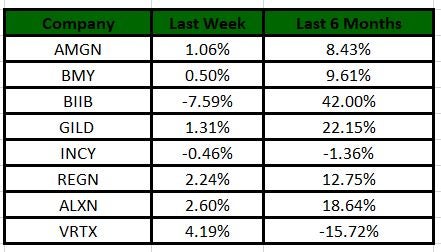