Savara’s shares have rallied 47.8% so far this year against the industry’s decrease of 8.7%. 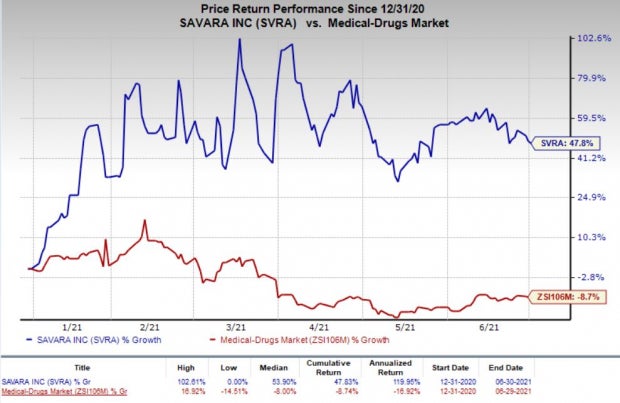 The IMPALA-2 study will evaluate a 300mcg dose of molgramostim in patients with aPAP compared to placebo for improvement in percent predicted diffusing capacity for carbon monoxide (DLCO), a gas exchange measure, as its primary endpoint. The treatment will be measured for primary efficacy endpoint at week 24. However, the company will continue to access efficacy of the candidate for additional 24 weeks to measure the durability of effect.

We note that the candidate previously failed in a phase II/III IMPALA study evaluating it in aPAP patients in 2019. The study had evaluated two dose administrations — once daily continuous administration of and once daily in seven-day intermittent cycles — of 300 mcg molgramostim over 24 weeks for change in alveolar-arterial oxygen gradient.

Although molgramostim had failed in the IMPALA study, results from the study demonstrated that the candidate has potential to be an important pharmacological treatment option for patients with aPAP.

The candidate enjoys Fast Track, Breakthrough Therapy and Orphan Drug designations as a treatment for aPAP in the United States, reflecting its potential as a new treatment option.

We remind investors that the company had discontinued development of AeroVanc last year, following failure in a late-stage study evaluating it in patients with cystic fibrosis who have Methicillin-resistant Staphylococcus aureus lung infection. The company also announced plans to reduce its workforce and focus primarily on development of molgramostim.

The successful development of molgramostim is key to boost the company’s prospect. Any setback to the candidate can be detrimental to the company.