EQT clarified that natural gas will remain the basis of its business and it will assume leadership in Environmental, Social, and Governance to help decarbonize the natural gas industry. Notably, the company plans to explore natural gas-based climate solutions, which include responsibly sourced gas (“RSG”), blue hydrogen and carbon offsets.

Although burning natural gas results in fewer emissions, methane released into the atmosphere is a far more potent GHG than carbon dioxide. Hence, the company is increasing its efforts to strengthen its environmental image as natural gas comes under major scrutiny amid the rising concerns over the impacts of climate change.

In 2020, EQT announced a sustainability budget of $75 million, which was meant to be spent over the next five years. This includes an estimated expenditure of $20 million to replace all pneumatic devices by 2023. Notably, the pneumatic devices are claimed to be the largest source of methane emissions in onshore oil and gas production. Hence, the progressive elimination of the devices will be a major advantage of EQT's positioning as a leading RSG producer.

To accomplish the target, the company shifted to electric fracking equipment last year and eliminated more than 23 million gallons of diesel fuel from its operations annually. Moreover, the company plans to use carbon offsets by reforesting land and using agriculture techniques to reduce emissions that it cannot prevent. This would be done on some of the company’s acreage it leased in Appalachia through agreements with landowners.

Although EQT’s comprehensive plan does not include net-zero Scope 3 emissions, it is exploring ways to significantly reduce emissions from the products that the company and others in the industry sell. Notably, natural gas production is usually less carbon-intensive compared to oil extraction, which brings gas explorers like EQT an advantage in setting net-zero goals.

Headquartered in Pittsburgh, PA, EQT is a leading explorer and producer of natural gas, with a primary focus on the Appalachian Basin in Ohio, Pennsylvania and West Virginia.

Shares of the company have underperformed the industry in the past six months. Its stock has gained 65.1% compared with the industry’s 92.5% growth. 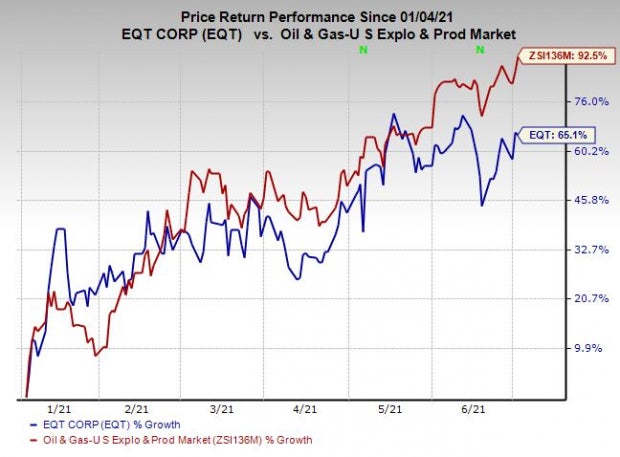 Over the past 60 days, the Zacks Consensus Estimate for Suburban Propane’s 2021 earnings has been raised by 23.2%, while that for Continental Resources has increased by 27.5%.