TC Energy Corporation (TRP - Free Report) is attempting to reclaim the financial losses, which resulted from the cancellation of the presidential permit for the Keystone XL pipeline project.

Notably, the company submitted a notice of intent to begin a legacy North American Free Trade Agreement (“NAFTA”) claim under the United States-Mexico-Canada Agreement. TC Energy seeks to recover more than $15 billion in damages incurred as a result of violations of its NAFTA obligations by the United States government.

The Keystone pipeline project has been experiencing criticism for the past 12 years, as it is alleged to affect local communities and exacerbate climate change. Hence, the project was terminated last month in response to American President Joe Biden’s decision to suspend the presidential permits to proceed with the pipeline construction.

The $8-billion pipeline was designed to carry crude oil from Alberta’s oil sands to U.S. Gulf Coast refineries. However, the project was opposed by environmental activists in both Canada and the United States as they claimed that the production and extraction of oil from oil sands will release a massive amount of greenhouse gases.

Although the pipeline was expected to be a green pipeline, its operations would have generated 1.44 million metric tons of carbon dioxide per year. Notably, this is equivalent to nearly the annual emissions from 300,000 passenger cars. Therefore, the construction and operation of the pipeline involved risks associated with the water supply and the environment.

TC Energy notified that the project’s suspension will result in several job cuts and hamper economic opportunities for thousands of workers. The company is currently planning to undo the construction, which was already completed. Notably, it will cooperate with regulators, shareholders and indigenous groups to ensure a safe termination and exit from the project.

Shares of the company have underperformed the industry in the past six months. Its stock has gained 20% compared with the industry’s 24.5% growth. 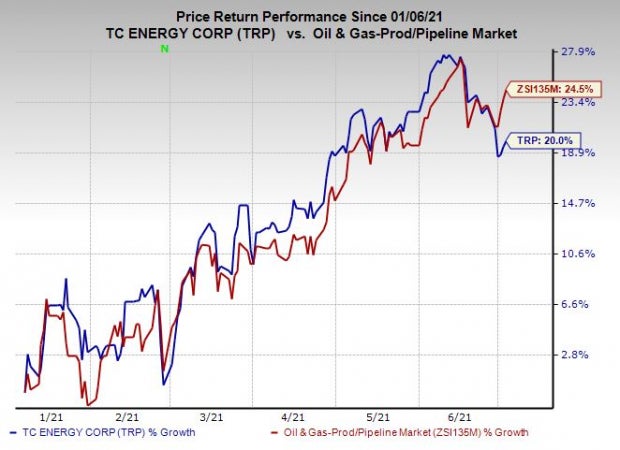 Range Resources’ earnings for 2021 are expected to increase 16.2% year over year.