Lamb Weston Holdings, Inc. (LW - Free Report) appears to be in a solid shape, with its shares having gained a solid 30.7% in the past year compared with the industry’s growth of 23.4%. The company has been benefiting from strength in the Retail business, thanks to elevated at-home demand amid the pandemic. Further, the company’s efficient price/mix and efforts to boost capacity have been yielding results. Let’s delve deeper into the upsides surrounding the company, which has a long-term earnings growth rate of 10.8%.

Lamb Weston boasts a solid Retail segment, which comprises revenues of private label and branded items to mass merchant, grocery and club customers across North America. The company’s Retail business sales grew 23% to $162.5 million in the third quarter of fiscal 2021. Price/mix advanced 10%, thanks to better mix stemming from increased sales of branded products. Volumes grew 13% on the back of robust growth in shipments of mainstream and premium brand offerings.

On its last earnings call, the company provided an update on the shipping trends for the first four weeks of the fourth quarter of fiscal 2021, until Mar 28, 2021. We note that management has offered a comparison with shipments in the fourth quarter of fiscal 2019, as it serves as a more meaningful base. In this regard, the company’s shipments in the United States were nearly 90% of the fourth-quarter fiscal 2019 level, driven by shipments to QSR and large full-service chain restaurants, as well as to customers served by the Retail segment. Notably, shipments to customers served by the Retail segment were about 110% of the fourth-quarter fiscal 2019 level. 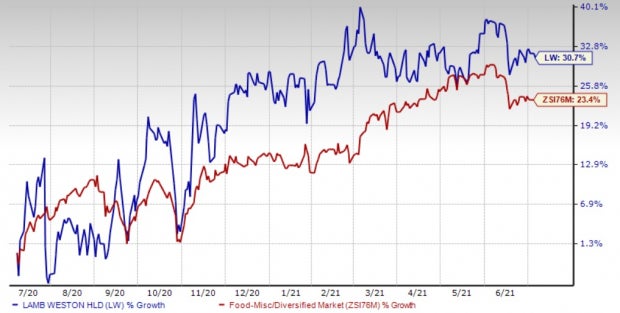 This producer, distributor and marketer of value-added frozen potato products has been benefiting from a robust price/mix, as witnessed during the third quarter of fiscal 2021. During the quarter, price/mix rose 2% on the back of improved pricing in the Retail and Foodservice segments, along with a better mix in the Retail unit. This somewhat aided sales, which were otherwise negatively impacted by lower volumes.

Moreover, Lamb Weston has been undertaking initiatives to boost offerings and operating capacity. In March 2021, the company unveiled plans to build a new french fry processing facility in Ulanqab, Inner Mongolia, China. Notably, this will be an addition to the company’s existing production capacity in China, which is in Shangdu, Inner Mongolia. Earlier, the company completed the expansion of a facility in Hermiston, OR, on Jun 18, 2019. The expansion has facilitated the addition of a new processing line for increasing the production of frozen french fries.

All said, we expect this Zacks Rank #2 (Buy) company to keep its splendid momentum going.

Medifast (MED - Free Report) has a Zacks Rank #2 and its bottom line outpaced the Zacks Consensus Estimate by 12.7% in the trailing four quarters, on average.

Celsius Holdings (CELH - Free Report) has a Zacks Rank #2 and its bottom line outpaced the Zacks Consensus Estimate by a wide margin in the trailing four quarters, on average.