U.S. telecom stocks started the past week on a positive note, buoyed by optimism surrounding the proposed legislation to safeguard the interests of the broader industry. After an earlier bipartisan legislation for $190 billion funds for R&D, manufacturing and supply chain and an additional $52 billion for boosting production of semiconductor chips & telecommunications equipment over the next five years, the House subcommittee is currently considering nine tech and telecom bills to improve cybersecurity practices that support wireless networks. While protecting the networks and industry supply chain mechanism from external threats, the bills aim to foster innovation and competition for unhindered operations. However, the stocks traded flat mid-week and witnessed a downtrend later to pare the initial gains, triggered by uncertainty within the industry on reports that the government is likely to grant ‘special treatment’ to the automotive sector for chip shortages.

The lawmakers are reportedly giving final touches to a bevy of telecom bills to reduce America’s dependence on China-based hardware and address national security concerns over wireless networks from adverse foreign entities. These include legislation on cybersecurity policy and creation of a council to improve the security and reliability of U.S. communications networks. Two other bills on the list titled "TEAM TELECOM Act" and the "Secure Equipment Act of 2021" are aimed at strengthening the interagency review process and the approval guidelines to tackle national security concerns over FCC approval of communication products from foreign firms. Another bill titled the "Open RAN Outreach Act" is intended to make the NTIA responsible for imparting education and technical assistance to small communications providers for replacing gears from China-based firms like ZTE and Huawei.

While these bills offer a safety cushion to the industry and appear to have spurred an uptrend, reported federal favoritism to the auto manufacturing sector for production hiatus owing to chip shortage likely sparked a downslide. Industry experts observed that continued chip shortage and supply chain disruptions extended beyond semiconductors to basic structural components and affected production of nearly every element of the communications sector. These included infrastructure products such as routers, switches and base stations to the user terminal side items such as laptops, desktops and mobile phones. To add to the woes, rising inflationary pressure has increased production costs, adversely impacting sector margins. Although the government has employed certain administrative steps to tide over the storm, it is yet to yield broad-based results across the spectrum. Amid this backdrop, industry trade groups opined that it would be unfair if any particular sector is favored at the expense of the other.

Meanwhile, Huawei has reportedly secured one of the largest deals in the automotive industry when it secured a licensing deal for an undisclosed amount for use of its 4G technologies in connected vehicles manufactured by Volkswagen Group. The deal assumes significance as it was struck amid persistent U.S. diplomatic pressure and insistence to debar China-based firms from sensitive communication network system owing to alleged security threats.

Powered by AT&T's wide network coverage, the edge computing solutions leverage Google Cloud's core capabilities in Kubernetes, AI, ML, data and analytics to offer a flexible tool to better analyze data and process low-latency, high-bandwidth applications. The collaboration particularly intends to enable customers to swiftly convert data into actionable intelligence, enabling unique digital experiences and smarter operations. The two companies aim to take their partnership to the next level by providing immersive customer experiences in industries like retail, healthcare, manufacturing and entertainment among others to help businesses add value to their operations.

2.     Ciena Corporation (CIEN - Free Report) partnered with Lumea, an Australia-based energy and telecommunications services provider, to revamp the latter’s telco infrastructure with avant-garde technology. Per the collaboration, Lumea will capitalize on Ciena’s WaveLogic Ai technology, which will enable it to deliver high-speed 100G+ wavelength services between its key data centers.

The partnership aims to empower new technologies such as 5G transmission and address networking challenges on the back of a streamlined infrastructure. It will not only significantly increase Lumea’s network capacity to support emerging bandwidth-intensive applications but also bridge the digital divide by driving innovation and making new-age technology accessible to more communities.

3.     Telefonica, S.A. (TEF - Free Report) announced that FiBrasil commenced its operations, involving the deployment of the fiber-to-the-home network in Brazil. FiBrasil is a fibre wholesale network, which was created out of a 50:50 joint venture between Telefonica Group and Caisse de dépôt et placement du Québec (“CDPQ”), a Canada-based investor in infrastructure, under a co-control governance model.

FiBrasil’s neutral fiber network is considered ideal for clients with lower capital requirements and shorter time-to-market. Consequently, this will help in augmenting its network footprint across various customer segments, thereby, speeding up the transition to fiber for digital development.

The company’s IP/MPLS and optical transport networks will improve efficiency, expand broadband services and enable distribution of renewable power. It will support applications that will be critical in IoT-based asset management and energy distribution.

5.   Canadian telecommunications company, TELUS Corp. (TU - Free Report) has expanded its 5G network to Cochrane as part of its C$54 billion investment in Alberta through 2024. With this service launch, residents and enterprises will have access to TELUS’ super-fast 5G network.

Working in partnership with equipment suppliers like Ericsson, Nokia and Samsung, TELUS is expanding its 5G network to an additional 529 new communities across the country. It aims to cover more than 70% of the population by the end of this year. 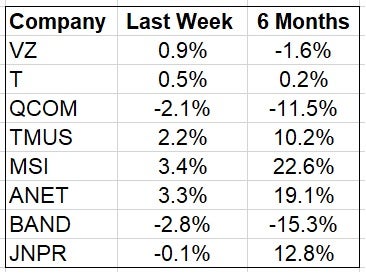 In the past five trading days, Motorola has been the best performer with its stock gaining 3.4%, while Bandwidth declined the most with its stock falling 2.8%.

Over the past six months, Motorola has been the best performer with its stock appreciating 22.6%, while Bandwidth declined the most with its stock falling 15.3%.

Over the past six months, the Zacks Telecommunications Services industry has gained 11.6% while the S&P 500 has rallied 15.5%. 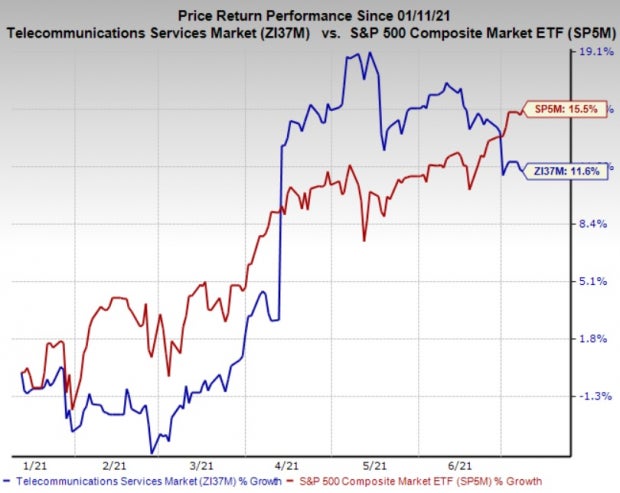 In addition to 5G deployments and product launches, all eyes will remain glued to how the administration implements key policy changes to safeguard the interests of the industry as it battles inflation and chip shortage with the earnings season lurking around the corner.

Chevron (CVX) Mulls Sale of Permian Oil Assets Worth $1B