Per the latest deal, General Electric will produce, supply and install a total of 34 Cypress wind turbine units at two wind farms located in Telsiai and one in Rokiskis, Lithuania. The turbines carrying a rotor diameter of 158m will be capable of operating at 5.5 MW. The company will work on installing these turbines at three wind farms, which together will have an installed capacity of 187 MW. It expects the installation of the Cypress turbines to get completed in 2022. Also, General Electric will be responsible for providing operational services in these facilities for 25 years.

The latest pact is built on a strong collaboration between both companies. In November 2020, General Electric was awarded a contract by European Energy to produce, supply and install 22 Cypress wind turbine units for three wind farms, based in Lithuania. The installation of the turbines on the projects (announced last November) is expected to get completed in the second half of this year.

With this agreement, European Energy will be able to operate 56 units of the Cypress wind turbine in Lithuania at six wind farms. These wind farms will have a total installed capacity of 308 MW.

The company with a market capitalization of $113 billion currently carries a Zacks Rank #3 (Hold). It stands to benefit from its portfolio-restructuring program, expansion in digital business and efforts to deleverage its balance sheet in the quarters ahead. However, persisting market-related challenges in the aviation sector remain a concern for the near term.

Shares of the company have gained 12.4% compared with 13.4% growth of the industry in the past six months. 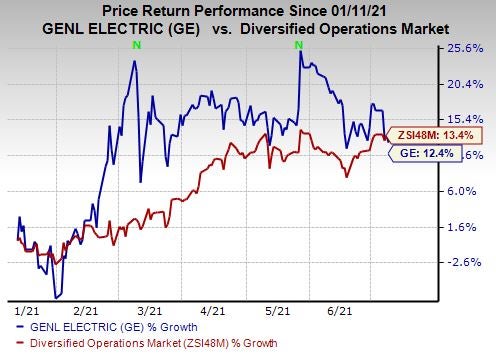 Griffon delivered an earnings surprise of 50.00% in the last reported quarter.

3M delivered an earnings surprise of 23.11% in the last reported quarter.

ITT delivered an earnings surprise of 21.84% in the last reported quarter.