On the news front, Stellantis (STLA - Free Report) made big headlines with its EV Day announcements. The company, which has rather been slow in embracing electrification, targets to spend €30 billion ($35.5 billion) in EVs and related technology through 2025 in a bid to catch up with peers. The stock currently carries a Zacks Rank #3 (Hold). You can see the complete list of today’s Zacks #1 Rank (Strong Buy) stocks here.

1. General Motors (GM - Free Report) released second-quarter vehicle sales numbers for China market. The automaker’s retail sales in China during the June-end quarter were more than 750,000 vehicles, marking a year-on-year increase of 5.2%. The upside can be attributed to outperformance in luxury and premium vehicles, SUVs and MPVs, including the Cadillac CT5 and XT6, Buick LaCrosse, Enclave and GL8 family. Sales of NEVs across the company’s brands also delivered robust performance. Meanwhile, General Motors issued a recall of more than 400,000 pickup trucks in the United States over defective air bags, wherein the roof-rail airbag could explode without warning, emitting parts into the cabin.

2. Group 1 Automotive (GPI - Free Report) released impressive preliminary second-quarter 2021 results. The auto retailer anticipates adjusted earnings of $10.20-$10.70 per share, indicating an increase from $5.57 recorded in the prior quarter. The bottom-line projection for the to-be-reported quarter also suggests a significant uptick from $3.77 a share reported in second-quarter 2020, when it was heavily hit by coronavirus woes. Solid vehicle margins in the United States, recovery in the U.K. market, operational discipline and strength in the U.S. service business are likely to aid Group 1’s results for second-quarter 2021. The company also announced the acquisition of nine businesses northeast of London, in a bid to bolster its U.K. footprint. The buyouts will add approximately $300 million to the firm’s annual revenues.

3. Volkswagen (VWAGY - Free Report) and BMW AG (BAMXF - Free Report) were slapped a fine of 875 million euros ($1.036 billion) cumulatively by the European Commission for collaborating to limit the use of emission-cleaning technology in the development and rollout of diesel cars. The European Union's (EU) antitrust authority discovered that three German automakers — Daimler (DDAIF - Free Report) , BMW and Volkswagen — breached EU antitrust rules by colluding to make illegal agreements. Volkswagen, including its Audi and Porsche marques, received a 45% waiver in the fine for helping the EC prove the existence of the cartel. It was fined 502.3 million euros ($595 million), while BMW was fined 372.8 million euros ($442 million). Truck maker Daimler, which revealed the cartel to the EC, was spared a fine of around 727 million euros.

4. Daimler’s truck arm, Volkswagen’s Traton Group, and the Volvo Group recently announced the decision to form a joint venture (JV) for developing a network of high-performance public charging stations for electric heavy-duty long-haul trucks and buses around Europe. These three leading European truck makers will enter into a non-binding agreement, the terms of which will be finalized by the end of this year. The three companies plan to jointly invest 500 million euros ($593 million) with the aim of installing and operating 1,700 charging points within five years in strategic locations and near highways. 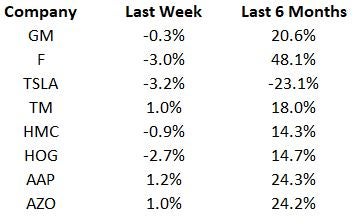 In the past six months, all stocks have increased, apart from Tesla. The past week displayed a mixed price trend, with Advance Auto Parts registering the maximum gain and Ford losing the most.

Industry watchers will track the passenger car registrations data in European Union for June 2021, which is likely to be released by European Automobile Manufacturers Association later this week.