So far this year, shares of Cheesecake Factory have gained 39.3% compared with the industry’s 12.1% growth. The price performance was backed by a solid earnings surprise history. Papa John’s earnings surpassed the Zacks Consensus Estimate in three of the trailing four quarters. Earnings estimates for full-year 2021 and 2022 have moved up 2.8% and 4.1%, respectively, in the past 60 days. This positive trend signifies bullish analysts’ sentiments and justifies the company’s Zacks Rank #2 (Buy). This indicates robust fundamentals and expectation of outperformance in the near term. You can see the complete list of today’s Zacks #1 Rank (Strong Buy) stocks here. 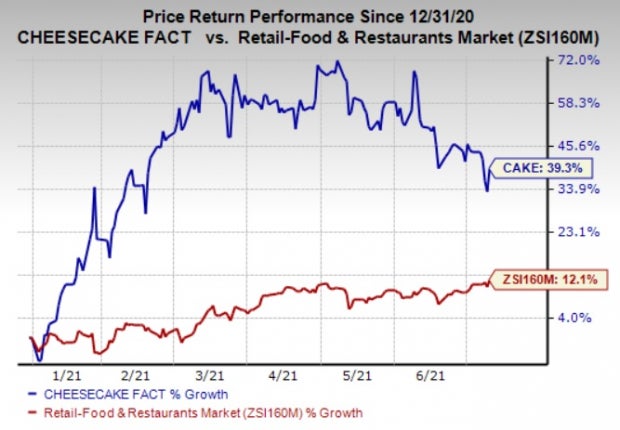 Robust Comps Growth: Cheesecake Factory continues to impress investors with robust comparable sales growth. On Jun 2, 2021, the company provided a business update for fiscal second quarter to date (through May 31, 2021), whereby comps surged 196% on a year-over-year basis. Comps also increased 7% from 2019 levels. The upside was primarily driven by solid off-premise sales mix. Meanwhile, weekly average sales for the quarter-to-date period (through May 31) amounted to approximately $226,500 or $11.8 million on an annual basis. As of May 31, the company announced that nearly all of its restaurants (across its concepts) were operating, while one Cheesecake Factory location was operating in an off-premise only model. Also, the company stated that the restaurants were operating at approximately 70% indoor capacity and approximately 75% total on-premise capacity (including patios).

Digitization Efforts: Cheesecake Factory’s focus on digitally-enabled initiatives and implementation of technology are doing well according to feedbacks on its mobile payment app, CakePay. The company is also witnessing incremental sales from its delivery service, which continues to be rolled out nationwide. To boost consumers’ convenience, the company implemented operational changes and technology upgrades that include contactless menu and payment technology as well as text paging. During first-quarter fiscal 2021, off-premise contributed approximately 43% to total Cheesecake Factory’s restaurant sales.

Emphasis on Fox Restaurant Concepts (FRC): Nearly after a year of closing its acquisition, Fox Restaurant Concepts or FRC not only reinforced its confidence and strength amid the ongoing pandemic, but also paved the path for long-term growth. During fiscal first quarter, FRC concept sales continued to increase and off-premise volumes remained solid. The in-restaurant kiosk technology enables a faster ordering experience and features AI that learns individual guest behavior to provide an enhanced experience. Going forward, FRC plans to incorporate this technology at future Flower Child locations, complementing the traditional ordering mechanism.

Other Sales Building Initiatives: Cheesecake Factory is consistently focusing on boosting sales to stay afloat in the competitive environment. Apart from digitalization, the company intends to add new Super Food items and the famous indulgences of The Cheesecake Factory to its menu. The Super Foods program increased consumer awareness of brands. Meanwhile, the company launched its Timeless Classics special menu card nationally.

Papa John's has a three-five year earnings per share growth rate of 15%.

Chuy's Holdings has a trailing four-quarter earnings surprise of 127.6%, on average.