Improved price/mix also led to an upside in all segments, whereas cost inflation remains a headwind. In fact, increased cost inflation prompted management to lower its guidance for fiscal 2022. 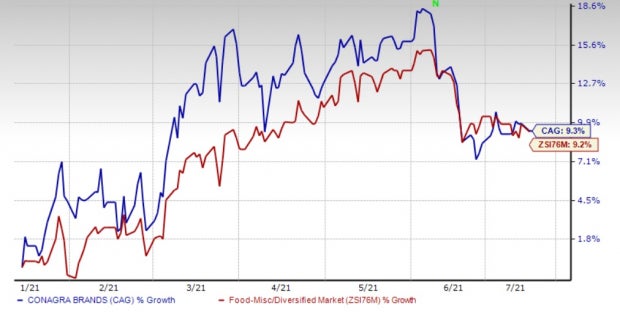 Conagra’s quarterly adjusted earnings came in at 54 cents, which surpassed the Zacks Consensus Estimate by a penny, though it tumbled 29.1% year over year. The year-over-year downside can be mainly accountable to a lower gross profit.

Conagra generated net sales of $2,739.5 million, which declined 16.7% year over year, while it surpassed the Zacks Consensus Estimate of $2,735 million. The year-over-year sales decline was a result of the divestitures of the H.K. Anderson business, the Peter Pan peanut butter business and the Egg Beaters business. The divestitures are collectively referred to as Sold Businesses.

Sales were also hurt by tough comparisons with the year-ago period that included an additional week. Reduced organic sales were also a factor dragging down the top line. Nevertheless, currency had a positive impact on sales.

Organic sales fell 10.1% due to lower volumes, whereas price/mix improved 2.7%. Volumes dropped 12.8% due to tough comparisons with the year-ago period’s initial spike in at-home food consumption stemming from the pandemic outbreak.

This weighed on all segments, apart from Foodservice, which on the contrary saw favorable comparisons with the last year. Price/mix primarily benefited from a favorable mix, reduced promotional activities and rollout of inflation-justified pricing.

Adjusted gross profit declined 22.4% to $721 million and the adjusted gross margin contracted 194 basis points to 26.3%. The downside was a result of a decline in net sales, cost of goods sold inflation, lost profits related to Sold businesses and comparisons with the year-ago period’s additional week.  These were partly compensated by cost synergies associated with the buyout of Pinnacle Foods and supply-chain productivity.

Adjusted EBITDA declined 24.6% to $520 million due to lower adjusted gross profit. Adjusted selling, general and administrative expenses, excluding advertising and promotional expenses, fell 14.7% to $263 million, mainly due to decreased incentive compensation and commission expenses. Also, a comparison with the last year, which included an extra week, benefited the SG&A.

Volumes in all segments, apart from Foodservice, were affected by tough comparisons with the year-ago period’s initial spike in at-home food consumption stemming from the pandemic outbreak. Price/mix in all segments was backed by efficient pricing, to counter cost inflation.

Grocery & Snacks: Quarterly net sales in the segment came in at $1,084.9 million, down 26.4% year over year due to lower organic sales, impacts from Sold Businesses and the absence of an additional week. Organic sales decreased 19%, with volumes down 9.4%. Price/mix grew 0.8%. During the fourth quarter, Conagra saw an increased share in staple categories like canned meat and tomatoes, as well as snacking categories like microwave popcorn and seeds.

Refrigerated & Frozen: Net sales fell 12% to $1,192.9 million due to the impact of Sold businesses, reduced organic sales and the absence of an additional week. Organic sales fell 5.5%, with volumes down 8.9%. Price/mix was up 3.4%. The company saw an improved share in categories like frozen handhelds, frozen vegetables, frozen appetizers and whipped topping.

International: Net sales fell 13.8% to $228.9 million due to the same factors affecting the abovementioned segments. Currency had a favorable impact of 6.5% on net sales. On an organic basis, net sales dropped 14.7%, as volumes slumped 21.2%. Price/mix rose 6.5%.

Foodservice: Sales advanced 20.8% to $232.8 million, thanks to a rise in organic sales, partly offset by the Sold Businesses’ impact and the absence of an additional week. Organic sales surged 31%, with volumes up 30.2%, backed by recovering restaurant traffic. Price/mix went up 0.8%.

Conagra exited the quarter with cash and cash equivalents of $79.2 million, senior long-term debt of $8,275.2 million and total stockholders’ equity of $8,631.4 million.

On May 27, 2021, the company concluded the divestiture of its Egg Beaters liquid egg business. The divestiture, which was mainly part of the company’s Refrigerated & Frozen business, is likely to reduce annual reported net sales by nearly $40 million and adjusted earnings per share (EPS) by roughly 1 cent.

In fiscal 2022, Conagra expects demand for its retail products to remain high compared with historical levels, as consumers have cultivated new habits during the pandemic. That said, the company is lately encountering cost of goods sold inflation.

Although management is focused on undertaking relevant saving and pricing efforts to combat this inflation, the timing and gains from these initiatives are likely to be more skewed toward the second half of fiscal 2022. These actions are unlikely to completely offset input cost woes in fiscal 2022. The first quarter of fiscal 2022 is, in fact, likely to be the lowest-margin quarter in the fiscal.

That said, management revised its guidance for fiscal 2022. Organic net sales are anticipated to be nearly flat year over year. Adjusted operating margin is anticipated to be nearly 16% and adjusted EPS is likely to be about $2.50. In its third-quarter fiscal 2021 earnings release, management guided for organic net sales growth of 1-2% (three-year CAGR ending fiscal 2022). Adjusted operating margin was expected in the range of 18-19% and adjusted EPS was envisioned between $2.63 and $2.73.

Shares of the company have gained 9.3% in the past six months, almost in line with the industry’s growth of 9.2%.

Medifast (MED - Free Report) has a Zacks Rank #2 and its bottom line outpaced the Zacks Consensus Estimate by 12.7% in the trailing four quarters, on average.

Celsius Holdings (CELH - Free Report) has a Zacks Rank #2 and its bottom line outpaced the Zacks Consensus Estimate by a wide margin in the trailing four quarters, on average.