First Majestic Silver Corp. (AG - Free Report) recently announced that total production in second-quarter 2021 reached 6.4 million silver equivalent ounces comprising 3.3 million ounces of silver and a record 46,545 ounces of gold. Compared to the first quarter, silver and gold production increased 13% and 95%, respectively. This was owing to a 14% increase in silver equivalent production from its three operating Mexican mines (Santa Elena, San Dimas and La Encantada) and the inclusion of production from the Jerritt Canyon operation in May and June. On a year-over-year basis, silver and gold production were up 83% and 195%, respectively.

On Apr 30, 2021, First Majestic completed the acquisition of the Jerritt Canyon Gold Mine in Nevada from Sprott Mining. It is one of the state's most prominent gold mines and marks the company’s first major investment outside of Mexico. First Majestic has been developing a long-term mine and exploration plan for the operation and has identified numerous projects that will be implemented over the next 12 to 24 months to improve production and reduce costs at the mine and processing plant.

During the quarter, the Liquid Natural Gas ("LNG") facility at Santa Elena successfully reached full capacity. Santa Elena is now the First Majestic’s second operation that has been fully converted from diesel to low-cost LNG power.

As of Jun 30, 2021, 26 exploration drill rigs were active across the company’s mines and projects comprising 13 rigs at San Dimas, six at Santa Elena, five at Jerritt Canyon and two at La Encantada.

First Majestic has updated its 2021 capital budget to $205.3 million to include the Jerritt Canyon operation, and reallocation of capital for development and exploration across its operations. This is 22% higher than its original 2021 capital budget. 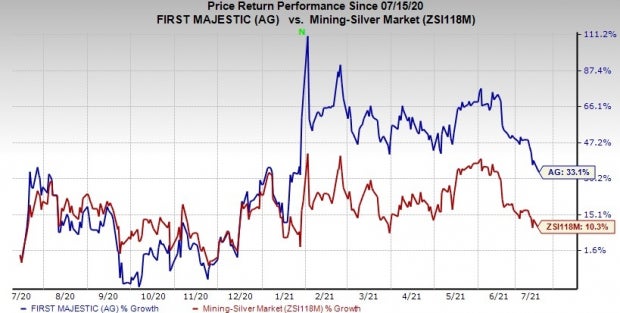 In a year’s time, First Majestic’s shares have gained 33.1% compared with the industry’s growth of 10.1%.

Nucor has a projected earnings growth rate of around 381.6% for the current year. The company’s shares have soared 129% in a year.

Olin has an expected earnings growth rate of around 506.7% for the current year. The company’s shares have skyrocketed 249% in the past year.

Commercial Metals has an projected earnings growth rate of around 22% for the current year. The company’s shares have appreciated 49% in the past year.