For the nine weeks ended Jul 3, 2021, L Brands’ net sales amounted to $2,350.9 million, up 71.7% from net sales of $1,369.2 million for the nine weeks ended Jul 4, 2020. In the prior-year period, the company’s sales were negatively impacted by pandemic-led store closures, thereby leading to favorable year-on-year comparison. Second quarter-to-date sales increased nearly 12% from sales of $2,100.5 million reported for the same period in fiscal 2019.

The sturdy preliminary second-quarter sales performance across the Bath & Body Works and Victoria’s Secret businesses is encouraging, prior to their planned separation in August. Clearly, the company’s strategic efforts to boost the performance of these business units are yielding. Both businesses are now well positioned to thrive as separate companies and continue with its growth momentum.

For the second quarter, L Brands expects adjusted earnings per share in the bracket of $1.20-$1.30, compared to the prior guidance of earnings in between 80 cents and $1.00 per share. The bottom line is likely to be driven by improved merchandise margin rates, strong customer response to assortments as well as disciplined inventory management enabling a reduction in promotional activity. For the impending quarter, the company expects to report operating income of more than $400 million for the Bath & Body Works segment, and more than $200 million for the Victoria’s Secret segment. L Brands is likely to report second-quarter earnings on Aug 18, 2021, after market close. 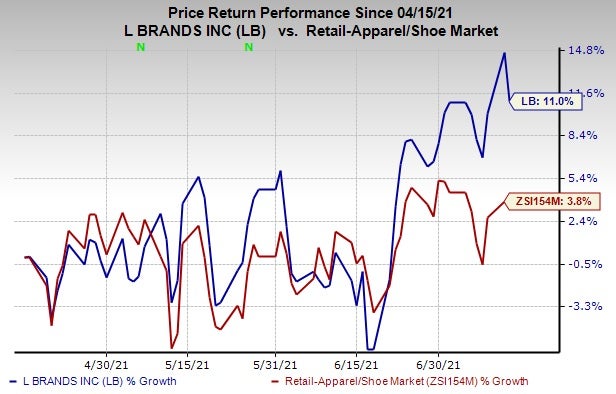 L Brands unveiled the go-forward capital structure for the standalone Bath & Body Works business, post the planned separation of Victoria’s Secret & Co. The strategy includes a new share repurchase authorization worth $1.5 billion shares. This will replace the previous $500-million share repurchase program announced in March, under which the company had $36.2 million remaining. Under the previous program, the company had repurchased a total of 7 million shares for $463.8 million. Management also intends to reduce debt by nearly $500 million and targets to achieve adjusted debt to EBITDAR leverage ratio in the mid-2x range. L Brands’ expects to continue with its current annual dividend of 60 cents per share.

The company also announced the initiation of an underwritten public secondary offering of 20,041,646 shares. The offering has been made by Leslie H. Wexner as well as certain affiliated selling stockholders. L Brands informed that it will buy an aggregate of 10,000,000 shares of its common stock directly from one of the selling stockholders. The price per share to be paid by the company will be equal to the public offering price in the offering, excluding the underwriting discount. The company will fund the repurchase through cash on hand. Management stated that this repurchase is part of the $1.5-billion share repurchase program.

L Brands currently carries a Zacks Rank #2 (Buy). Shares of the company have gained 11% in the past three months compared with the industry’s rise of 3.8%.