It was a busy week for the biotech sector with quite a few pipeline and regulatory updates. Collaboration and licensing agreements were also in focus this week.

Updates From Biogen:  Biogen (BIIB - Free Report) announced that it has entered a license and collaboration agreement with InnoCare Pharma Limited for pipeline candidate, orelabrutinib. The candidate is an oral small molecule Bruton’s tyrosine kinase inhibitor (BTKi), which is being developed for the potential treatment of multiple sclerosis (MS).

Earlier, Biogen announced that the FDA has approved an updated label for Alzheimer’s disease’s drug, Aduhelm (aducanumab-avwa) injection 100 mg/mL solution. Per the approved label, treatment with Aduhelm should be initiated only in patients with mild cognitive impairment or mild dementia stage of disease, the population in which treatment was initiated in clinical trials. However, there are no safety or effectiveness data on initiating treatment at earlier or later stages of the disease.

Prothena to Sell Its ATTR Amyloidosis Program: Prothena Corporation (PRTA - Free Report) announced a collaboration with Novo Nordisk (NVO - Free Report) , whereby the latter will acquire the former’s clinical-stage antibody, PRX004, and the broader ATTR amyloidosis program. Prothena has completed a phase I open-label, multicenter dose-escalation study of PRX004 in patients with hereditary forms of ATTR. Per the terms, it is eligible to receive development and sales milestone payments of approximately $1.2 billion, including $100 million in upfront and near-term clinical milestone payments. Novo Nordisk will develop the phase II antibody, PRX004, for the rare heart disease, ATTR cardiomyopathy.

Amgen’s Drug Gets Priority Review: Amgen (AMGN - Free Report) announced that the FDA accepted its biologics license application (BLA) and granted Priority Review to its pipeline candidate, tezepelumab. The BLA is seeking approval of the drug for the treatment of asthma. Amgen is developing the drug in collaboration with AstraZeneca. The agency will give a decision by the first quarter of 2022.

The application was based on results from the PATHFINDER study, which included results from the phase III study, NAVIGATOR. The results showed that tezepelumab demonstrated superiority across every primary and key secondary endpoint compared to placebo in a broad population of patients with uncontrolled asthma while receiving treatment with medium- or high-dose inhaled corticosteroids (ICS) plus at least one additional controller medication with or without oral corticosteroids (OCS).

Celldex Surges on Positive Data From Hives Study: Shares of Celldex Therapeutics, Inc. (CLDX - Free Report) have been on the upward trajectory after it reported positive data from its ongoing, open-label phase Ib study of CDX-0159 in patients with antihistamine refractory cold urticaria and symptomatic dermographism, the two most common forms of chronic inducible urticaria. Data showed that all the 19 patients who received a single full dose of CDX-0159 experienced a clinical response to provocation testing. In the study, 95% experienced a complete response and 5% experienced a marked partial response. Responses were rapid, profound and durable, and correlated with depletion of skin mast cells.

Sigilon Plunges as FDA Places Clinical Hold on Study: Shares of Sigilon Therapeutics, Inc. (SGTX - Free Report) plummeted after it announced that the FDA placed a clinical hold on its phase I/II study evaluating its most advanced candidate, SIG-001, in patients with severe or moderately severe hemophilia A. The clinical hold came following the clinical-stage biotechnology company’s announcement of a serious adverse event (SAE) and a temporary enrollment halt. Three patients have been dosed with SIG-001 to date. The third patient who received the highest dose of the study drug developed inhibitors to Factor VIII (FVIII), a well-known complication of FVIII therapy.

Consequently, the FDA requested additional information or data on factors potentially contributing to the development of inhibitors in this patient, such as family history and immune stimulation from a recent vaccination. The three patients enrolled in this study will continue to be under observation per study protocol. 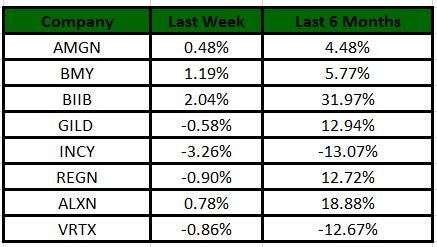 The Nasdaq Biotechnology Index lost 1.52% in the last five trading sessions. Among the biotech giants, Biogen gained 2.04% during the period. Over the past six months, shares of Biogen have surged 31.97%. (See the last biotech stock roundup here: Biotech Stock Roundup: ALEC Surges on Deal With GSK, CVAC Down on Study Results & More).