Valued at $160.5 million, the contract is expected to get completed by Apr 30, 2023. Per the terms, the MFC unit will also offer support requirements related to HIMARS M142 launchers.

Work related to the deal will be carried out in different parts of the United States.

HIMARS is the newest member in the Multiple Launch Rocket System (MLRS) family. It enables troops to engage in and defeat artillery, and air defense concentrations.

In recent times, missile defense systems have gained significant traction in the U.S. aerospace-defense market. This upside can be attributed to advancements and integration of new tactical features followed by improved markets for cruise missiles, ballistic missiles, air to air missile, directed energy weapons and anti-satellite weapons. With Lockheed Martin being a prominent missile developer and the Pentagon’s largest defense contractor, increasing demand for missiles has been resulting in significantly higher inflow of contracts.

This in turn has boosted the MFC segment revenues. The MFC unit recorded 11.4% year-over- year revenue growth in the first quarter of 2021. We expect this business segment to deliver similar top-line performance, based on consistent order flows from the Pentagon like the latest one.

Per a report by Mordor Intelligence, the global Missiles and Missile Defense Systems (MMDS) market value is projected to see a CAGR of over 10% during 2021-2026 time period. The uptick is likely to be driven by growing conflicts between various countries and an increasing number of investments on missile defense systems being made by different countries worldwide, along with rapid technological advancements.

In a year’s time, shares of Lockheed Martin have gained 3% compared with the industry’s 16.6% rally. 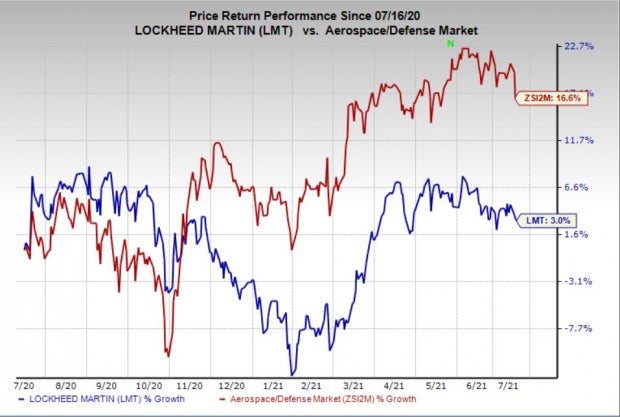