Installed with Canadian Solar’s high-efficiency modules, these solar plants are projected to produce approximately 23 GWh electricity annually, which will be equivalent to displacing 7,150 tons of annual carbon emissions. This is the second private PPA signed by the company in Italy.

With the entire world making a shift toward renewables, Italy is no exception. In its National Energy and Climate Plan, the nation set a target of installing 52 GW of solar capacity by 2030, almost 2.5 times the 20.9 GW installed by 2019.

Such an ambitious target naturally indicates enhanced growth opportunities for solar players like Canadian Solar. In fact, Italy is also one of Canadian Solar's key markets in the Europe, Middle East and Africa (EMEA) region, with the company aimed at executing its solar pipeline in excess of 1.3 gigawatt-peak (GWp) in the country. Therefore, the latest PPA with Centrica should put Canadian Solar a step forward in achieving this target.

In May 2021, Canadian Solar signed a long-term PPA with Axpo Italia, thereby enabling the latter to buy electricity worth 12 MWp from two solar plants in Italy. This reflects yet another initiative taken by Canadian Solar to expand its footprint in Italy’s solar market.

In May 2021, Sunrun (RUN - Free Report) entered into a partnership agreement with Ford Motor Company (F - Free Report) to provide Intelligent Backup Power solutions to its customers. The alliance will provide a seamless installation of an 80-amp Ford Charge Station Pro and Home Integration System for the All-Electric Ford F-150 Lightning. Ford is launching its all-electric F-150 Lightning, which will serve as a reliable home backup energy source by dispatching power during power outage. This in turn should enhance Sunrun’s footprint in the U.S. solar market.

Shares of Canadian Solar have gained 73.7% in the past year compared with the industry’s 55.7% surge. 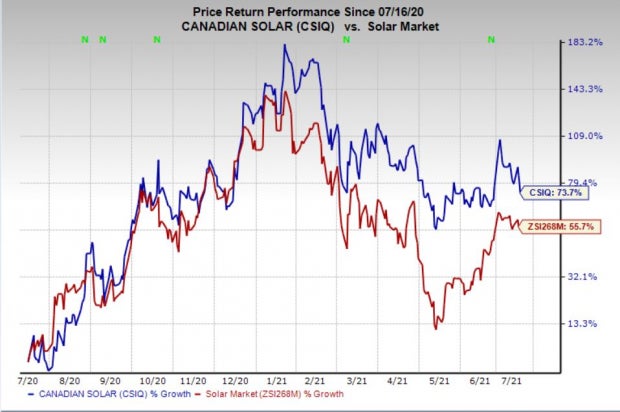 What's in Store for Southwest (LUV) This Earnings Season?