FibroGen, Inc. (FGEN - Free Report) announced that the FDA’s Cardiovascular and Renal Drugs Advisory Committee (CRDAC) has voted against approval of its investigational candidate, roxadustat, which was being developed for the treatment of anemia of chronic kidney disease (CKD) in both non-dialysis-dependent (NDD) and dialysis-dependent (DD) patients. The candidate is being jointly developed with AstraZeneca (AZN - Free Report) .

The committee’s discussions were based on the new drug application (NDA) for roxadustat, which is currently under review in the United States. The NDA was supported by positive results from a phase III study including more than 8,000 patients.

Per the company, despite the unfavorable outcome for roxadustat, it will continue to work with the FDA authorities as the regulatory body continues its review of the NDA. The FDA will consider independent opinions and recommendations from experts, along with the CRDAC’s recommendation, while it reviews the NDA.

Shares of FibroGen were down 35.6% in pre-market trading on Jul 16, following the announcement. The company’s shares have declined 33% so far this year compared with the industry’s decrease of 9.8%. 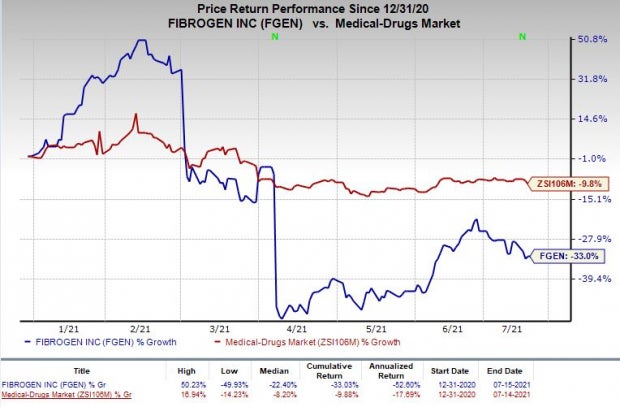 The review procedure for Roxadustat NDA has already been extended by almost seven months. The NDA was accepted by the FDA in February 2020 and the action date was set in December 2020. In December last year, the FDA extended the review period by three months to March 2021 to review additional data submitted by FibroGen. In March, the company announced that the CRDAC committee with review the NDA for roxadustat.

Although the advisory committee outcome is unfavorable for the company, the FDA may also consider the fact that Roxadustat is approved for a similar indication in China, Japan, Chile, and South Korea. Moreover, the Committee for Medicinal Products for Human Use (CHMP) has recommended the approval of roxadustat in Europe.

However, there are very few cases where the FDA has not followed its advisory committee’s recommendation. Biogen’s (BIIB - Free Report) Alzheimer’s disease drug, Aduhelm (aducanumab) is one such drug that was approved by the FDA in June this year, despite an FDA advisory committee voting against its approval.