Retail sales popped 0.6% in June compared to May, the Commerce Department reported Friday. This topped projections but marks growth against May’s decline. Despite the positive June retail expansion, consumer sentiment has slipped amid rising prices and inflation worries.

The good thing is the nearly completely reopened U.S. economy is surging overall and early second quarter earnings results and guidance highlight the broader strength. The S&P 500 is projected to post strong growth against the pre-covid period in FY19, and the numbers are projected to keep improving. And the U.S. economy is projected to expand in the +6.5% to 7% range this year and north of +5% in 2022.

Despite inflation concerns, Wall Street pushed stocks to records to start Q3, as they jumped back into technology. The recent run pushed many tech names above overbought RSI levels of 70 and the pullback over the last several days could possibly be the start of another healthy recalibration. Investors might also use Q2 earnings season as a chance to take profits no matter how impressive results and guidance might be.

Still, the market is poised to remain strong as Wall Street will be left chasing returns in stocks even when the Fed raises interest rates because bond yields are poised to remain historically low for the foreseeable future.

With this in mind, let’s look at three highly-ranked stocks trading at solid discounts to their recent highs. All three names might be worth buying as long-term plays poised to benefit from the strong U.S. economy…

Five Below has been a standout retail stock, having outshined fellow discount industry peer Dollar General (DG - Free Report) and even Target (TGT - Free Report) in the last five years on the back of its desire to expand its store base within a niche retail space. FIVE sells what it calls “trend-right, high-quality products loved by tweens, teens and beyond,” nearly all for between $1 to $5. Some of its offerings do cost more than $5 and its stores cover everything from sports and tech to candy, books, and much more.

The discount retailer doesn’t compete directly against Dollar General or many other larger retailers since its offerings are more non-essential goods for younger customers. FIVE opened 67 net new stores in Q1 FY21 (period ended May 1) to finish the quarter with 1,087 stores across 39 states, up 18% from the year-ago period. Of course, FIVE has boosted its e-commerce presence in the Amazon (AMZN - Free Report) age and it currently offers same-day delivery options. In late June, the retailer expanded its Instacart partnership nationally.

Five Below’s revenue had climbed by around 20% to 30% for the last seven years, having posted even larger growth previously. FIVE took a hit during covid, but it bounced back in the second half to post 6% sales growth in 2020.

Five then topped our Q1 estimates, with revenue up 198% against the easy to compare period last year, and 64% above the pre-covid period in FY19. Five Below’s Q1 comps jumped 23% above the pre-pandemic period, while its EPS surged 91% to $0.88 from FY19 levels.

FIVE’s positive post-release earnings revisions help it land a Zacks Rank #1 (Strong Buy) right now alongside a “B” for Growth in our Style Scores system. The company has also crushed our EPS estimates in three out of the last four quarters, as part of a strong history of bottom-line beats.

Plus, Wall Street remains high on the stock, with 12 of the 17 brokerage recommendations Zacks has coming in at “Strong Buy” or “Buys,” with none below a “Hold.”  FIVE is also part of the Retail-Miscellaneous space that is in the top 18% of over 250 Zacks industries. It has soared 275% in the last five years to outpace its industry, which includes an 80% run in the past 12 months. Luckily, the stock has cooled down in 2021, up just 6%.

Five Below trades about 9% below its records at $185.50 a share and it comes in well below neutral RSI levels at 43. Five also trades at a strong discount in terms of both forward earnings and sales compared to its own highs and median over the past year. Therefore, investors with longer-term horizons might want to consider this discount retailer that continues to expand.

Callaway manufactures and sells high-end golf equipment and apparel. The firm, which went public back in the early 1990s, has expanded through acquisitions. Today its portfolio features multiple brands, including its namesake, Odyssey, TravisMathew, and more. ELY then made a splash last fall when it announced its plans to buy Topgolf.

Callaway closed its merger with the fast-growing, high-tech driving range firm in March. ELY had previously invested in Topgolf and the deal could prove to be a hit since the upscale driving range chain attracts tons of “non-golfers,” which is great for a sport that’s struggled to grow its base.

The firm topped our Q1 estimates and management projected that adjusted FY21 EBITDA will beat FY19 levels for its legacy Callaway unit and “meet or exceed” FY19 for Topgolf. This highlights surging demand as people return to their normal lives.

Zacks estimates call for Callaway’s FY21 revenue to soar 76% from $1.6 billion to $2.8 billion, driven by Topgolf’s inclusion. ELY is then projected to follow up this expansion with another 21% sales growth in FY22.

Its adjusted earnings are projected to fall to $0.15 a share this year, before bouncing back to +$0.34 next year. The company’s longer-term adjusted EPS consensus estimates have climbed to help it capture a Zacks Rank #1 (Strong Buy) right now. 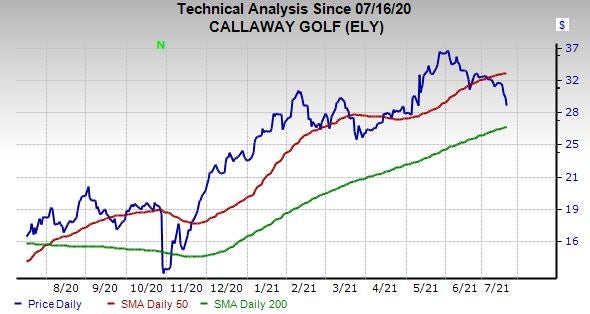 Wall Street is rather bullish on the newly-beefed up golfing giant, with six of the nine brokerage recommendations Zacks has at “Strong Buys,” with one more “Buy” and two “Holds.” ELY stands to benefit from continued consumer spending, driven by pent-up demand. And its Leisure and Recreation Products industry currently ranks in the top 7% of over 250 Zacks industries.

ELY soared off its pandemic lows and it has skyrocketed another 95% since the end of October on the back of its Topgolf news and the vaccine announcement/reopening push. This run includes an industry-topping 24% expansion in 2021. Luckily for investors who missed out on the ride, ELY is down 20% since early June and is currently trading at around $30 a share.

Callaway’s quick downturn has pushed it below oversold RSI levels of 30 at 26. The recalibration has also improved its valuation metrics. All of this gives ELY plenty of potential fairway to hit and long-term investors might want to consider the golfing powerhouse as the broader market sits closer to overbought levels. That said, some could think about waiting for signs of a comeback, as it did sink below its 50-day moving average in early July.

Chewy is an e-commerce pet store that went public in 2019 and has expanded rapidly as consumers gravitate toward convenience. The firm sells pet food, supplies, treats, medications, and more for a variety of animals. Chewy has found success by adding loyal pet owners to its ranks, with 70% of sales coming from its Autoship business that allows people to have food and more delivered at regular intervals.

Chewy added 43% more users in 2020 to close the year with 19.2 million and its Autoship unit creates consistent revenue. The company, which has been at it for a decade, has expanded its offering.

The company topped our Q1 estimates in early June, with revenue and new active customers both up 32%. Chewy closed the quarter with 19.8 million active customers, up 600K sequentially. “Further, retention rates remained steady as the 2020 cohort matures into their second year on our platform. Taking a broader view, over the past two years, we have increased our active customer base by 8.4 million or 75%,” CEO Sumit Singh said on the company’s earnings call. 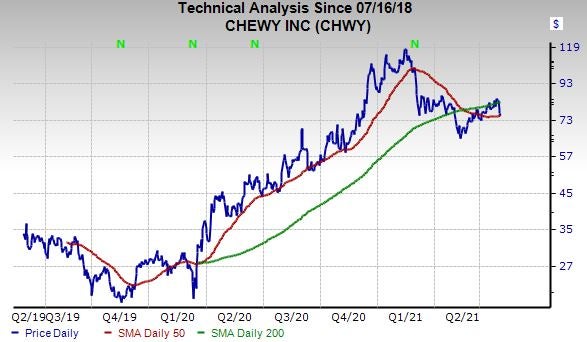 Chewy reported its first quarterly profit in Q4, crushing our bottom-line estimates. The company then followed up with another period of positive adjusted earnings in Q1. And Zacks estimates call for its FY21 EPS to climb 11%, with FY22 set to skyrocket 210% to $0.31 a share. CHWY’s FY21 and FY22 consensus earnings estimates have popped since its release and it sits at a Zacks Rank #2 (Buy) at the moment.

On top of that, nine of the 14 brokerage recommendations Zacks has are “Strong Buys.” More importantly, e-commerce was booming long before the pandemic and people utilizing delivery, especially automated delivery for essentials like pet food are unlikely to go back even as they return to their normal lives.

Chewy shares had soared over 300% from their March 2020 lows to their February highs of around $120 a share. CHWY then got hit hard as Wall Street sold high-flyers. The stock did mount a bit of a comeback after it fell below oversold RSI territory (30) back in May. CHWY is up 60% in the last year and yet it trades 35% below its records at around $77 a share.

CHWY has fallen back below neutral RSI levels (50) at 43 and it trades at a discount to its own year-long median and nearly 50% below its highs at 3.3X forward sales. Like with ELY, some investors might want to see signs of another turn around given some of its technical levels (nearby chart). But those with long horizons shouldn’t worry as much about trying to time a stock.