Amid heightening climate concerns, the EU proposed to phase out fossil-fuel cars by 2035. The legislation, if passed, would require automakers to slash carbon emissions from new vehicles by 55% within 2030 versus the existing target of a 37.5% reduction by 2030. The European Commission further proposed a 100% cut in carbon emissions by 2035, which would effectively ban the sale of new gas and even hybrid cars.

Meanwhile, the second-quarter 2021 earnings season kicked off for the auto industry last week, with Autoliv (ALV - Free Report) reporting weaker-than-expected results on Jul 16. Shares of the company slid 4.8% on Friday, as the firm not just reported earnings and revenue miss but also lowered its 2021 guidance amid shortfall of semiconductor supply.

Penske Automotive (PAG - Free Report) reported stellar second-quarter 2021 preliminary figures, driven by growth across all segments of the business. Robust volume and product margins, reopening of the U.K. market, its second largest market, the expanding Class 8 commercial truck market, breakthrough performance at Penske Transportation Solutions as well as continuous cost-containment initiatives aided the results. Penske anticipates earnings before taxes to be more than $450 million, income from continuing operations to exceed $325 million and related earnings per share to be more than $4, each marking a whopping jump of more than 600% from the year-ago period.

Volkswagen (VWAGY - Free Report) issued an update on its long-term strategy for 2030 under the name of “New Auto”, pivoting on electric and driverless goals. It expects electric vehicles to account for half of its global vehicle sales by 2030. The Germany-based automaker projects 100% of its new vehicles in major markets to be carbon free by 2040. The firm plans to have six battery cell production gigafactories operating in the continent by 2030, which are to produce unit battery cells for its own use. It also expects software to be another revenue stream by 2025. The company has set aside 73 billion euros ($86.4 billion) for the development of future technologies by 2025, accounting for 50% of total investments. It also intends to capture a niche market in the autonomous driving sector, with personal vehicles to be equipped with level 4 autonomous driving by 2025.

Cummins (CMI - Free Report) commenced testing of a hydrogen-fueled internal combustion engine. The proof-of-concept test will help boost the company’s existing technology dominance in gaseous-fuel applications and powertrain. It also announced a MoU with Chevron to explore commercially feasible business prospects in hydrogen and other alternative energy sources. Meanwhile, the board approved a quarterly cash dividend of $1.45 per share, marking a 7% increase from the previous figure of $1.35 per share. This implies the 12th consecutive year of dividend increase for Cummins. The dividend is payable on Sep 2, to shareholders of record on Aug 20, 2021.

General Motors (GM - Free Report) notified that it would be suspending operations at four of its factories in North America amid the global chip crunch. The factories — including San Luis Potosi and Ramos Assembly in Mexico, Lansing Delta Township in Michigan and Spring Hill Assembly in Tennessee — will be shuttered for two weeks starting today. Meanwhile, the U.S. auto giant also announced an investment of more than $71 million for setting up a new three-building campus in Northeast Pasadena, CA. The campus will be used for operating the company’s Advanced Design and Technology Centre. General Motors currently sports a Zacks Rank #1 (Strong Buy). You can see the complete list of today’s Zacks #1 Rank stocks here. 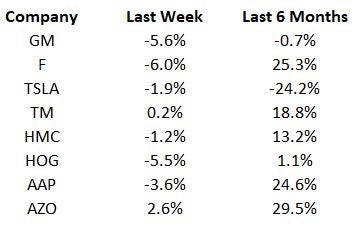 Industry watchers will keep a tab on commercial vehicle registrations for the month of June, which are to be released by the ACEA this week. Also, stay tuned for quarterly reports of auto firms including AutoNation, Harley-Davidson, Lithia Motors, Genuine Parts and Gentex Corp., which are set to report this week.