The Boeing Company (BA - Free Report) recently clinched a delivery order contract for providing F/A-18 aircraft spare parts. The deal has been awarded by the Defense Logistics Agency Aviation, Philadelphia, PA. Valued at $34 million, the contract is expected to be completed by Aug 28, 2028. Work related to this deal will be carried out in Missouri.

Boeing, being the largest aircraft manufacturer in the United States, enjoys a dominant position in the combat aircraft market. Its F/A-18 Super Hornet combat aircraft has emerged as the leading choice of weapon for militaries across the world. In fact, the Royal Australian Air Force and the Kuwait Air Force, apart from the U.S. Navy, operate these fighter aircraft in large numbers. Furthermore, nations like Canada, Finland, Switzerland and Spain currently have Boeing’s Super Hornet in their arsenal.

Such factors boost the contract winning possibilities of Boeing in relation to the Super Hornet aircraft, as is evident from the latest contract. Consequently, such contracts bolster the jet maker’s profit count.

With rising security threats across the globe, emerging economies like the Asia Pacific, the Middle East and South America are spending a lot on enhancing their defense arsenals. Meanwhile, developed nations like the United States and Europe have already been leading the defense market. With the United States being the largest weapons exporter worldwide, the nation has been spending amply on defense products, wherein combat aircraft enjoys one of the dominating positions.

The U.S. fiscal 2022 defense budget proposal provisioned $52.4 billion for investments in military aircraft spending, where more than $8.5 billion has specifically been allotted to Boeing’s combat aircraft. This should enable the company to clinch more contracts like the latest one, related to military aircraft and associated services, considering its proven expertise in varied combat aircraft.

Per a Research and Markets report, the global combat aircraft market is expected to witness a CAGR of 4% during the 2020-2025 time period. Such growth can be attributed to rise in global threats and geopolitical instabilities, and increased spending on defense. These projections should also benefit other combat jet manufacturers like Northrop Grumman (NOC - Free Report) , Lockheed Martin (LMT - Free Report) and Airbus (EADSY - Free Report) .

Shares of Boeing, a Zacks Rank #3 (Hold) company, have gained 24.9% in the past year compared to the industry’s growth of 15.2%. You can see the complete list of today’s Zacks #1 Rank (Strong Buy) stocks here. 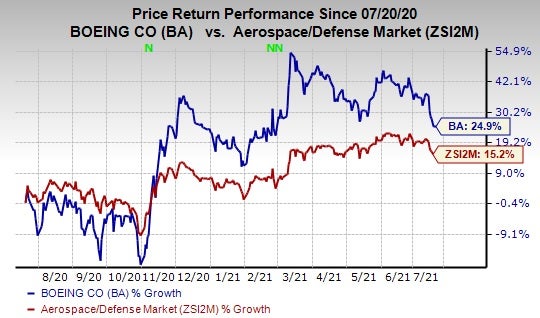