Today’s episode of Full Court Finance at Zacks discusses some reasons for the recent market pullback amid a strong start to the second quarter earnings season. The episode then explores three ‘Strong Buy’ stocks—Chewy (CHWY - Free Report) , Tempur Sealy (TPX - Free Report) , and Nike (NKE - Free Report) —for investors to consider adding as stocks fall from their records in the early weeks of Q3.

Stocks fell on Monday as part of a recent pullback after all three major U.S. indexes reached new highs to start the third quarter. Bond yields also slipped to start the week, with the 10-year U.S. Treasury down to its lowest levels since February, driven by technical factors including short-covering, along with lower summer supply, a return to safety, and more.

Despite the lower yields, which make tech and other growth stocks more attractive, the market has pulled back from its highs amid the strong start to Q2 earnings season. The pullback has been blamed on economic slowdown worries, fears about the Delta coronavirus variant, and other factors.

Profit-taking might be a simpler reason for the healthy selling, after the Nasdaq had soared over 13% from mid-March until last week’s records. Tech stocks from Apple (AAPL - Free Report) to Adobe (ADBE - Free Report) and countless others had soared to new highs until they recently reached some potentially overheated levels. 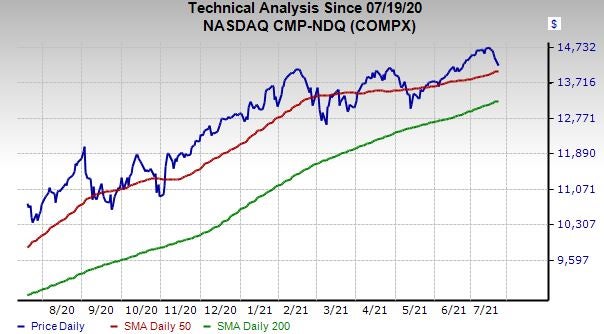 Wall Street might continue to use the impressive second quarter earnings season as a chance to keep selling. The Nasdaq has now slipped about 4% in the last week and some large, tech-tracking ETFs such as QQQ (QQQ - Free Report) and XLK (XLK - Free Report) have quickly tumbled from above overbought RSI levels (70) to near neutral (50) over the course of the last several trading sessions (also read: Q2 Earnings Reports Confirm Economic Boom Ahead).

Investors might continue to pull profits until Wall Street bulls see their favorite stocks reach more attractive levels once again. But those with long-term horizons can hurt themselves by trying to time the market and they should also remember bond yields are poised to remain historically low even when the Fed starts to raise rates in the next couple of years, likely prolonging TINA investing.

With this in mind, we dive into three Zacks Rank #1 (Strong Buy) stocks that investors might want to consider amid the market pullback.

The first stock up is e-commerce pet store giant Chewy that has accumulated roughly 20 million active customers, with 70% of sales coming from loyal Autoship users. CHWY popped nearly 7% during regular hours Monday as bullish investors prevented the stock from falling below a key technical threshold. Chewy also still trades roughly 25% below its February records and is poised to grow for years in an e-commerce world dominated by Amazon (AMZN - Free Report) , Target (TGT - Free Report) , and Walmart (WMT - Free Report) .

Meanwhile, Tempur Sealy has slipped around 10% from its early July highs, setting up a better possible entry point for the high-end mattress and bedding giant ready to keep growing amid strong consumer spending and the housing boom.

Last up is a stock that soared to records after it blew away Q4 FY21 estimates in late June. Nike stock has cooled down since its initial post-release climb and the sportswear powerhouse is set to thrive as it expands its digital efforts and impacts fashion far beyond sports.