Barring one-time items, adjusted earnings per share came in at $3.40, which topped the Zacks Consensus Estimate of $3.36.

The company witnessed strong steel demand in the reported quarter while shipments and product pricing maintained their positive momentum across its entire steel platform.

The company's steel fabrication operations raked in sales of around $330.9 million, up around 54% year over year. Operating income rose around 5% to $28.5 million on a year-over-year basis, aided by record shipments and higher realized pricing.

Steel Dynamics ended the second quarter with cash and cash equivalents of $1,113.7 million, down around 26% year over year. Long-term debt was around $3,016.5 million, up 14% year over year.

The company generated $587 million of cash flow from operations in the second quarter.

Steel Dynamics stated that it is witnessing strong steel demand and significantly low customer steel inventory throughout the supply chain. The automotive sector remains strong notwithstanding the semiconductor shortage while other sectors such as construction, equipment and transportation remain solid. The company is also seeing strong order entry activity across its businesses, which along with low inventory, is supporting strong steel selling values. Steel Dynamics envisions the momentum to continue throughout 2021 and expects its third-quarter earnings to represent another record performance. It remains optimistic regarding the steel market dynamics in North America.

The company is currently hot-commissioning the value-added paint line and expects the galvanizing line to start operations next month. It expects actual steel production to be delayed due to the excessive heavy rains in Texas. Steel Dynamics anticipates shipments from Sinton to be in the range of 100,000 tons during the balance of 2021 and between 2.2-2.4 million tons in 2022.

Shares of Steel Dynamics have rallied 118.6% in the past year compared with 130.5% rise of the industry. 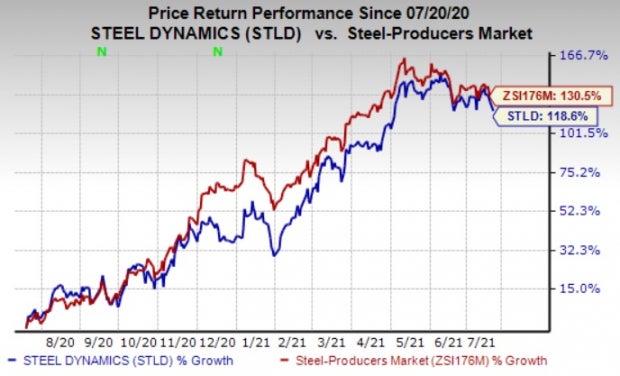 Nucor has a projected earnings growth rate of 403% for the current year. The company’s shares have surged around 121% in a year.

ArcelorMittal has an expected earnings growth rate of 1,484.4% for the current year. The company’s shares have shot up around 151% in the past year.

Cabot has an expected earnings growth rate of around 137.5% for the current fiscal. The company’s shares have gained roughly 38% in the past year.

Quantum Computing is Set to Transform Tech: 5 Stocks to Watch