Philip Morris International Inc. (PM - Free Report) reported second-quarter 2021 results, with the top and the bottom line increasing year over year. The bottom line also surpassed the Zacks Consensus Estimate. Results were backed by favorable pricing variance. During the quarter, the company witnessed volume growth across cigarettes and heated tobacco product categories. It gained from revenue growth in combustible and reduced-risk products (RRPs). Growing number of users of IQOS was an upside during the quarter. The company revised its view for 2021, reflecting growth in adjusted net revenues and earnings, on an organic basis.

Adjusted earnings per share came in at $1.57, which beat the Zacks Consensus Estimate of $1.54. Further, the bottom line rallied 21.7% year over year. On an organic basis, the bottom line increased 17.8%.

Net revenues of $7,594 million increased 14.2% from the figure reported in the year-ago quarter. The top line missed the Zacks Consensus Estimate of $7,840 million. Net revenues, on an organic basis, improved 7.9%. The upside can be attributed to favorable pricing variance, volume/mix and higher cigarette volumes. The upsides were partly offset by unfavorable impacts stemming from the Saudi Arabia customs assessments worth $246 million.

During the second quarter, revenues from combustible products were up 5.4% to $5,318 million on growth across most regions, except the Middle East & Africa and East Asia & Australia. Revenues in RRPs increased 41.7% to $2,276 million.

In the Middle East & Africa region, net revenues declined 20.5% to $560 million. The metric fell 18.2% on an organic basis due to adverse impacts of Saudi Arabia customs assessments. Total shipment volumes in the region rose 12.7% to 30,859 million units.

Revenues in South & Southeast Asia increased 17.7% to $1,046 million. Revenues in the region were up 10% on an organic basis. The upside was a result of favorable volume/mix partly and pricing variance. Shipment volumes expanded 6% to 35,360 million units.

Finally, revenues from Latin America & Canada increased 16.8% to $430 million. The metric was up 9% on an organic basis due to favorable volume/mix and pricing. Moreover, total shipment volumes rose 3.2% to 15,353 million units.

This Zacks Rank #3 (Hold) company ended the second quarter with cash and cash equivalents of $4,915 million. Also, it had long-term debt of $27,414 million and shareholders’ deficit of $9,200 million.

The company approved a new share repurchase program of up to $7 billion. Per the program, the company targets to spend $5-7 billion over a three-year period, commencing from third-quarter 2021. The company also declared regular quarterly dividend of $1.20 per share, representing an annualized rate of $4.80.

Update on IQOS & Beyond Nicotine

Continued strength in IQOS acted as an upside during the second quarter. At the end of the quarter, IQOS users amounted to approximately 20.1 million. Among them, nearly 14.7 million users are estimated to have switched to IQOS and stopped smoking. Market share for heated tobacco units in IQOS markets (excluding the United States.) were up by 1.4 points to 7.3%. Management highlighted that it is on track with launching IQOS ILUMA in Japan next month.

In February 2021, the company revealed plans of generating at least $1 billion in annual net revenues from "Beyond Nicotine" products by 2025. The initiative leverages its expertise in life sciences, inhalation technology and natural ingredients amongst others. As part of the strategy, the company entered into an agreement to acquire Vectura Group plc for approximately $1.2 billion. Vectura is a provider of innovative inhaled drug delivery solutions. Philip Morris will fund the transaction with existing cash and expects to close the same in the second half of 2021.

The company also entered into an agreement to acquire Fertin Pharma A/S, in a transaction worth approximately $820 million. Fertin Pharma is a leading manufacturer and developer of innovative pharmaceutical and well-being products that are based on oral and intra-oral delivery systems. Philip Morris expects to complete the acquisition in fourth-quarter 2021, by funding the same through existing cash. 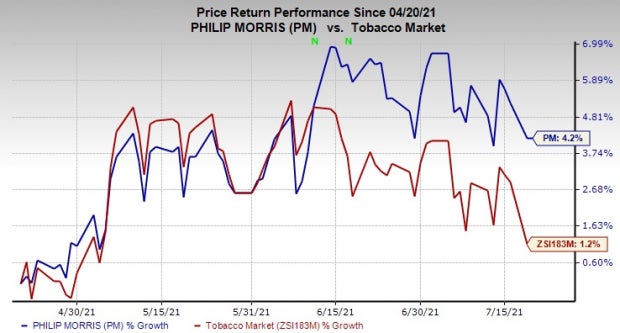 Philip Morris is on track to lower the COVID-19-related business disruptions. The company notified that it currently has adequate access to inputs and is not encountering any major supply-related hurdles. All of the company’s cigarette and heated tobacco unit production units are operational globally. The pandemic doesn’t have any major impact on the availability of the company’s products to its customers and adult consumers. Further, the company has sufficient liquidity to manage business.

Coming to the guidance, the company revised its view for 2021 and envisions adjusted earnings per share (EPS) in the range of $5.97-$6.07 compared with the earlier view of $5.95-$6.05. At constant currency, adjusted EPS are expected to grow 12-14% to $5.79-$5.89 compared with growth of 11-13% anticipated earlier. The guidance takes into consideration favorable impacts from currency exchange rates worth 18 cents per share. The Zacks Consensus Estimate for earnings in 2021 is currently pegged at $6.08.

In 2021, management expects gradual improvement in the general operating landscape. The company does not expect a near-term recovery in the duty-free business due to travel-related uncertainties. In fact, management expects the existing dynamics to persist through the end of 2021. Additionally, total cigarette and heated tobacco unit shipment volume growth is likely to be between flat to an increase of 2% in 2021. Heated tobacco shipment volumes are envisioned in a band of 95-100 billion units in 2021.

For 2021, Phillip Morris expects adjusted net revenues to increase nearly 6-7% on an organic basis, compared with growth of 5-7% anticipated earlier. Adjusted operating margin on an organic basis is likely to rally 200 basis points in 2021.

For third-quarter 2021, the company expects earnings in the bracket of $1.50-$1.55, including favorable currency impact of nearly 4 cents per share.

Shares of Phillip Morris have gained 4.2% in the past three months compared with the industry’s rise of 1.2%.

Medifast, Inc. (MED - Free Report) , also with a Zacks Rank #2, delivered an earnings surprise of 12.7% in the trailing four quarters, on average.