It was a low-key week for the biotech sector with very few pipeline and regulatory updates.

Regeneron’s Antibody Cocktail Gets Approval: Regeneron (REGN - Free Report) announced that its antibody cocktail, casirivimab and imdevimab, for the treatment of COVID-19 has been approved in Japan. The cocktail, known as REGEN-COV in the United States, was granted full approval in Japan under the name Ronapreve. The antibody cocktail was granted a Special Approval Pathway under article 14-3 of the Pharmaceuticals and Medical Devices Act in Japan. The approval was based on positive results from a phase III study in high-risk non-hospitalized patients, which showed that the antibody cocktail reduced the risk of hospitalization or death by 70% along with results from a phase I study that examined the safety, tolerability and pharmacokinetics in Japanese people.

Pipeline Update From Bristol Myers:  Bristol Myers (BMY - Free Report) announced disappointing results from the phase III study, CheckMate -651. The study compared Opdivo (nivolumab) plus Yervoy (ipilimumab) to the EXTREME regimen (cetuximab, cisplatin/carboplatin and fluorouracil) as a first-line treatment in platinum-eligible patients with recurrent or metastatic squamous cell carcinoma of the head and neck (SCCHN). The study did not meet its primary endpoint. While the combination of Opdivo plus Yervoy showed a clear, positive trend toward overall survival (OS) in patients whose tumors express PD-L1 with a combined positive score (CPS) ≥ 20, it did not reach statistical significance.

Pipeline, Regulatory Updates From BioMarin: BioMarin Pharmaceutical Inc. (BMRN - Free Report) announced new data from the GENEr8-1 study on its investigational gene therapy, valoctocogene roxaparvovec, for the treatment of adults with severe hemophilia A. The study demonstrated superiority in key clinical efficacy endpoints compared to baseline factor VIII prophylactic therapy. More than 90% (n=134) of all subjects in the GENEr8-1 study had an annualized bleed rate (ABR) of zero or a lower bleed rate than baseline at week 4 after treatment with valoctocogene roxaparvovec.

The European Medicines Agency (EMA) validated its Marketing Authorization Application (MAA) for valoctocogene roxaparvovec. The MAA is seeking approval for adults with severe hemophilia A.  An opinion from the CHMP is anticipated in the first half of 2022. The submission includes safety and efficacy data from the 134 subjects enrolled in the phase III GENEr8-1 study.  Earlier, the EMA granted the company's request for accelerated assessment of the application.

Vertex Initiates Study:  Vertex Pharmaceuticals (VRTX - Free Report) announced the initiation of a phase II proof-of-concept (POC) study in acute pain following bunionectomy surgery with the selective NaV1.8 inhibitor VX-548. The company plans to begin a second phase II study in acute pain following abdominoplasty surgery in the coming weeks. The phase II studies are randomized, double-blind, placebo-controlled studies that will evaluate multiple doses of VX-548 in patients with acute pain following bunionectomy surgery or abdominoplasty surgery. Both studies will also include a hydrocodone bitartrate /acetaminophen reference arm. The primary endpoint in both studies is the time-weighted Sum of the Pain Intensity Difference over the first 48 hours of treatment (SPID48). Results from the bunionectomy study are expected by the first quarter of 2022. 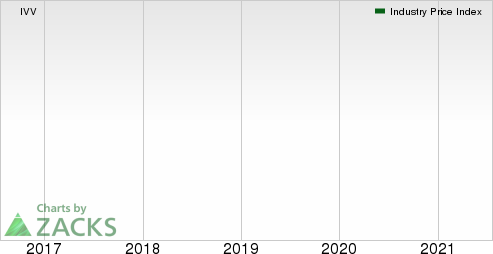 The Nasdaq Biotechnology Index gained 1.90% in the last five trading sessions. Among the biotech giants, Regeneron gained 1.77% during the period. Over the past six months, shares of Biogen have surged 19.32%. (See the last biotech stock roundup here: Biotech Stock Roundup: BIIB & PRTA Provide Updates, CLDX Up on Positive Data & More ) 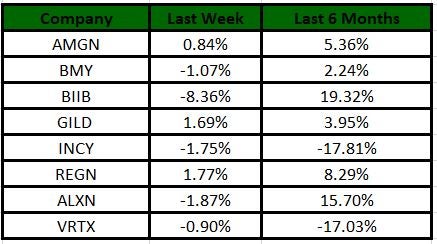