The company announced that the FDA identified deficiencies in the NDA, which prevent discussion related to labeling and post-marketing requirements/commitments currently. Although the FDA did not provide specific details regarding the deficiencies, it noted that the size of the treatment effect and its clinical relevance was a key issue. Moreover, the FDA denied a request for a meeting made by the company to discuss the deficiencies.

The FDA also stated that the notification about deficiencies does not reflect its final decision related to the NDA.

We note that Ardelyx submitted the NDA supported by data from three successful pivotal studies. The company also had a discussion related to labeling with the FDA in April. The unexpected deficiency notification from the FDA significantly impacted investors’ sentiments. However, the FDA had extended the review period for tenapanor NDA in April by three months.

Shares of Ardelyx have declined 68.9% so far this year compared with the industry’s decrease of 11.9%. 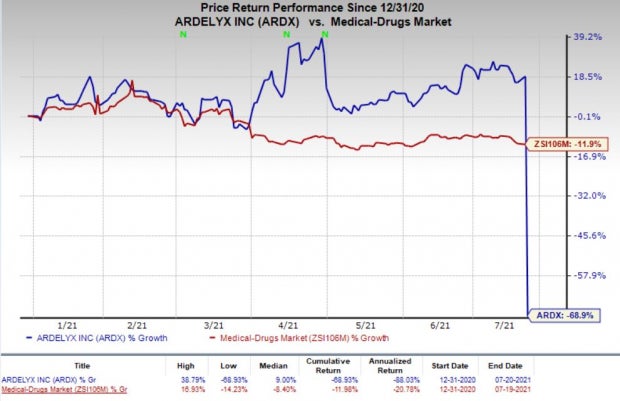 The company’s tenapanor is already approved as Ibsrela for treating irritable bowel syndrome with constipation (IBS-C) in adults.

Ardelyx is also developing another pipeline candidate, RDX013, as a treatment for hyperkalemia — a condition of elevated level of potassium in the blood. The company has an ongoing discovery program for a bicarbonate exchange inhibitor for the treatment of metabolic acidosis.