U.S. telecom stocks mirrored the broader benchmark indices and witnessed a downtrend over the past five trading days, amid fears of resurgence of the coronavirus from the Delta variant and speculations of protracted economic recovery owing to mounting inflationary pressures. The uptick in infections and imposition of fresh restrictions in several parts of Asia and Europe threatened to derail the global economic revival, spooking the 10-year U.S. Treasury yields and inducing a decline in the industry’s growth trajectory. However, better-than-expected earnings performance from hitherto reported companies appeared to spur optimism about the economic revival and triggered a partial recovery of sorts toward the end of the past week.

The House Energy and Commerce Committee approved a bevy of telecom bills to reduce America’s dependence on China-based hardware and address national security concerns over wireless networks from adverse foreign entities. The committee approved by voice vote eight bipartisan bills pertaining to issues regarding cybersecurity policies and improving the security and reliability of U.S. communications networks. These included the "Secure Equipment Act of 2021", aimed at strengthening the approval guidelines for communication products from foreign firms, “Understanding Cybersecurity of Mobile Networks Act” to determine cyber vulnerabilities in mobile networks, and the “FUTURE Networks Act” to establish a 6G task force.

The FTC also voted to initiate rulemaking procedures per the President’s executive order to offer consumers and third-parties a “right to repair” their devices without going through the device manufacturer. The rulemaking is likely to be a time-consuming affair with possibilities of it being challenged in the court, thereby delaying the process of implementation. Moreover, with the five-member FCC deadlocked with two Republican and two Democratic representations, the Order is likely to be delayed until the fifth member is nominated and confirmed, adding to the uncertainty within the sector.

However, solid quarterly earnings results from hitherto-reported sector participants partially offset the downturn and provided confidence to the beleaguered industry. The sector was also buoyed by the announcement of the construction of a second chip-making factory in New York by semiconductor manufacturer GlobalFoundries. The factory will double the site's chipmaking capacity and boost output to address the global chip shortage. With about $1 billion investment, the existing factory's output is likely to be increased by 150,000 wafers per year, the bulk production of which can help to meet the current demand-supply imbalance.

1.     Verizon Communications Inc. (VZ - Free Report) reported strong second-quarter 2021 results with the top and bottom line beating the respective Zacks Consensus Estimate. Backed by a disciplined network strategy for long-term growth along with a focused roadmap for 5G technology leadership, the company witnessed a healthy demand curve across core businesses. Verizon expects to continue this momentum throughout the year driven by customer-centric business model and diligent execution of operational plans, and revised its earlier guidance to better reflect the improving business conditions.

Excluding non-recurring items, non-GAAP net income in the reported quarter was $1.37 per share, which surpassed the Zacks Consensus Estimate by 7 cents. Total quarterly operating revenues increased 10.9% year over year to $33,764 million with growth across all the business segments. The top line beat the consensus estimate of $32,688 million.

On a GAAP basis, net income in the June quarter was $3.8 million or 3 cents per share against net loss of $12.4 million or loss of 9 cents per share in the prior-year quarter. The year-over-year improvement was mainly driven by higher revenues, fueled by strength in recurring service revenues. The bottom line beat the Zacks Consensus Estimate by 11 cents. Quarterly revenues totaled $149.9 million compared with $140.2 million in the year-ago quarter, mainly driven by strength in subscriber equipment sales and higher service revenues. The top line surpassed the consensus mark of $148 million.

Net income in the June quarter was SEK 3,679 million ($436.8 million) or SEK 1.10 (14 cents) per share compared with SEK 2,452 million or SEK 0.74 per share in the prior-year quarter. The improvement was primarily driven by higher EBIT (earnings before financial items and income tax). The bottom line, however, missed the Zacks Consensus Estimate by 1 cent. Quarterly reported net sales slipped 1.1% year over year to SEK 54,941 million ($6,522.9 million). The top line lagged the consensus estimate of $6,651 million.

As a technology partner, Google Cloud will enable Bell to drive operational efficiency and increase network automation. Bell will move and upgrade its IT infrastructure, network functions and critical applications from on-premise to Google Cloud. With its 5G network and Anthos, Google Cloud’s multicloud solution, Bell will be able to provide enhanced customer service with greater automation and flexibility. It will utilize Google Cloud’s expertise in AI and big data to gain insights through real-time network data analytics.

5.     Altice USA, Inc. (ATUS - Free Report) recently launched 4K streaming devices — Optimum Stream and Suddenlink Stream — to rev up the entertainment experience. At a time when the media sector is witnessing a drastic shift in the TV consumption pattern with majority of customers migrating toward best-in-class over-the-top (OTT) streaming content, the latest move is likely to be highly beneficial for Altice’s Suddenlink and Optimum businesses.

The newly unveiled devices can be availed by Altice’s broadband-only customers. The user-friendly 4K streaming devices are powered by Android TV OS wherein subscribers can benefit from Google Assistant feature on the remote to connect with smart home devices just with one’s fingertips. Further, customers can have seamless access to more than 50 free live streaming channels. 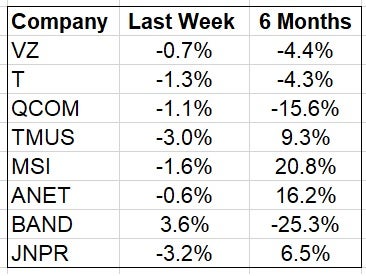 In the past five trading days, Bandwidth has been the best performer with the stock gaining 3.6%, while Juniper declined the most with its stock falling 3.2%.

Over the past six months, Motorola has been the best performer with its stock appreciating 20.8%, while Bandwidth declined the most with its stock falling 25.3%.

Over the past six months, the Zacks Telecommunications Services industry has gained 8.8% while the S&P 500 has rallied 11.7%. 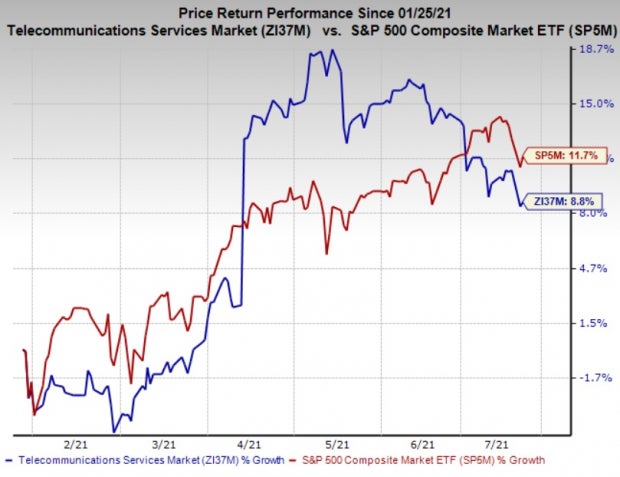 In addition to 5G deployments and product launches, all eyes will remain glued to how the administration implements key policy changes to safeguard the interests of the industry with the earnings season picking up steam.