Merck (MRK - Free Report) announced that the European Commission has granted approval to its and Germany-based partner Bayer’s (BAYRY - Free Report) heart failure drug, Verquvo (vericiguat). The drug will be available as a treatment for symptomatic chronic heart failure with reduced ejection fraction (HFrEF) in adult patients who are stabilized after a recent decompensation event requiring intravenous (IV) therapy.

Bayer has also submitted regulatory applications seeking approval for vericiguat in several other countries, including China.

So far this year, Merck’s shares have declined 6.6% against an increase of 9.5% for the industry. 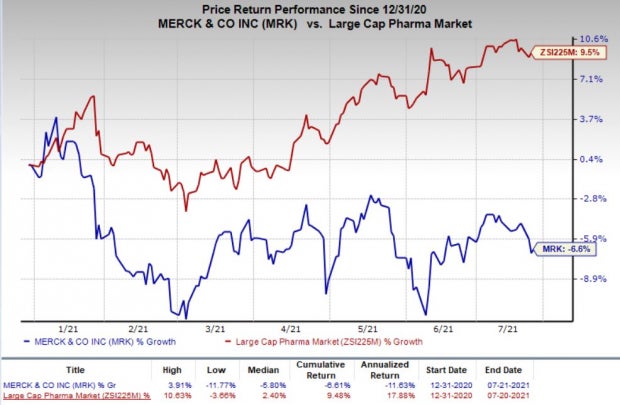 The approval was based on data from the phase III study — VICTORIA — evaluating Verquvo in patients with worsening chronic heart failure. The VICTORIA study evaluated vericiguat versus placebo when given in combination with available heart failure therapies in patients with worsening chronic heart failure with reduced ejection fraction (HFrEF) also known as systolic heart failure. Data from the study showed that vericiguat was superior to placebo in reducing the risk of composite endpoint of heart failure hospitalization or cardiovascular death in such patients. The data showed that there was a 4.2% reduction in annualized absolute risk with Verquvo compared with placebo.

Although the drug represents a significant opportunity for both companies due to huge patient population, it will likely face competition from Novartis’ (NVS - Free Report) Entresto and AstraZeneca’s (AZN - Free Report) Farxiga, which have already been launched to treat HFrEF. Cytokinetics is developing its pipeline candidate, omecamtiv mecarbil, in late-stage clinical program targeting HFrEF.