Pacific Biosciences of California, Inc. (PACB - Free Report) , popularly known as PacBio, recently inked a definitive merger agreement to acquire Omniome, Inc, subject to customary closing conditions and regulatory approvals. The buyout will enable PacBio to become the only company having both largely accurate long-read and short-read sequencing platforms under its wings.

The latest acquisition will aid PacBio to significantly expand its market share for sequencing in innovative ways, thus strengthening its global foothold.

Rationale Behind the Buyout

Per PacBio’s management, the acquisition of Omniome is expected to pave the way for wider and faster adoption of Single Molecule, Real-Time or SMRT sequencing technology. The company expects to reach more customers with a deeper product offering following the addition of short-read sequencing technology to its long-read portfolio.

Per a report by Allied Market Research, the global DNA sequencing market was valued at $6,243 million in 2017 and is expected to reach $25,470 million in 2025 at a CAGR of 19%. Factors like surge in sequencing applications and rise in technological advancements are likely to drive the market.

Given the market potential, the inking of the buyout deal seems to be timed well.

Of late, PacBio has entered into a slew of strategic deals.

The company, this month, announced its intent to expand its multi-year collaboration with Invitae Corporation (NVTA - Free Report) to develop a production-scale high-throughput HiFi sequencing platform to include the sequencing technology developed by Omniome.

PacBio also announced preliminary revenues for second-quarter 2021. The company expects to release detailed financial results for the period on Aug 3.

Per the preliminary report, second-quarter 2021 revenues are estimated at $30.5 million, suggesting around 78% growth from the year-ago quarter. The Zacks Consensus Estimate of $30 million is below the preliminary figure.

Notably, the expected uptick in the second quarter will represent the fifth consecutive quarter of growth. 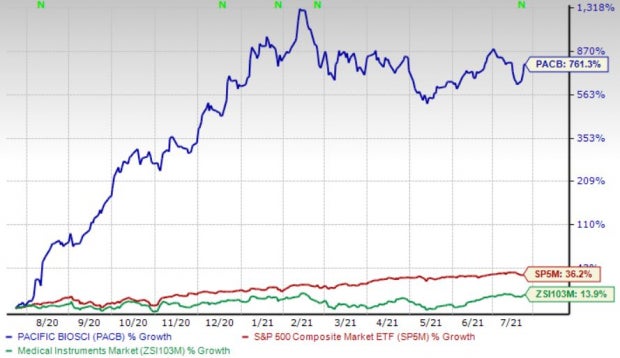