Major banks that reported second-quarter 2021 results this week beat earnings estimates on reserve releases and somewhat decent performance of fee income sources. Yet, investors remain concerned about subdued lending scenario that has been plaguing banks since the start of coronavirus pandemic last year.

Not so impressive management guidance for the later part of the year, despite robust economic growth expectations, has added fuel to fire. As such, investor sentiments remained on the pessimistic side and weighed on most bank stocks over the past five trading days.

During the second quarter, low interest rates, flattening of the yield curve and muted loan demand led to lower net interest income and contraction of banks’ net interest margins. As banks continued to spend heavily on technology upgrades and undertook efforts to streamline operations, expenses rose during the quarter.

On the fee income front, major banks’ financials got support from the solid performance of investment banking business and decent mortgage banking operation, while trading performance was dismal. Consumer banking business offered some support, as reflected in the rise in usage of debit/credit cards and higher consumer confidence.

Important Earnings of the Week

1. KeyCorp’s (KEY - Free Report) second-quarter 2021 earnings of 72 cents per share handily surpassed the Zacks Consensus Estimate of 55 cents. The bottom line improved substantially from 16 cents earned in the prior-year quarter. Results benefited from a rise in non-interest income, higher loan and deposit balances, and provision benefit. However, lower rates and increase in operating expenses were the undermining factors.

4. Capital One’s (COF - Free Report) second-quarter 2021 adjusted earnings of $7.71 per share handily outpaced the Zacks Consensus Estimate of $4.78. The bottom line improved significantly from adjusted loss of $1.61 incurred in the year-ago quarter. Results benefited from solid rise in loan balances and higher consumer confidence, leading to revenue growth. Provision benefits acted a tailwind. However, rise in operating expenses was an undermining factor. During the quarter, the company built legal reserve of $55 million.

5. Bank OZK’s (OZK - Free Report) second-quarter 2021 earnings per share of $1.16 easily surpassed the Zacks Consensus Estimate of 94 cents. In the year-earlier quarter, the company recorded earnings of 39 cents. Results were aided by rise in revenues, partly offset by higher expenses. The company also recorded provision benefits in the quarter, which was a major tailwind. 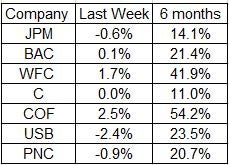 Over the past five trading days, Capital One and Wells Fargo recorded maximum gains, with their shares rallying 2.5% and 1.7%, respectively. On the other hand, shares of U.S. Bancorp have lost 2.4% during the same period.

Over the next five trading days, the focus will largely be on earnings releases as several banks are scheduled to report second-quarter numbers. Bank of Hawaii Corporation is slated to announce results on Jul 26, while Trustmark Corporation will report on Jul 27.

Investors will also keep a watch on central bank’s two-day FOMC meeting on Jul 27-28, though there is no chance of any change in the monetary policy.