During the quarter, the company witnessed higher demand for comfort products across several markets as consumers began returning to a normal lifestyle amid easing pandemic restrictions. Moreover, the company’s investments in long-term growth strategies including brands and infrastructural capabilities have been yielding. Management highlighted that the company was able to accomplish strong second-quarter results despite hurdles stemming from the pandemic like delayed shipments, port constraints and temporary store closures in certain markets.

For the remainder of the year and the following periods, the company is optimistic regarding strength of its brands and relevance of their distinct product offerings. The company updated the guidance for 2021 and provided an encouraging view for the third quarter.

Shares of this Zacks Rank #2 (Buy) company have gained 37.5% in the past six months compared with the industry's rise of 17.3%. 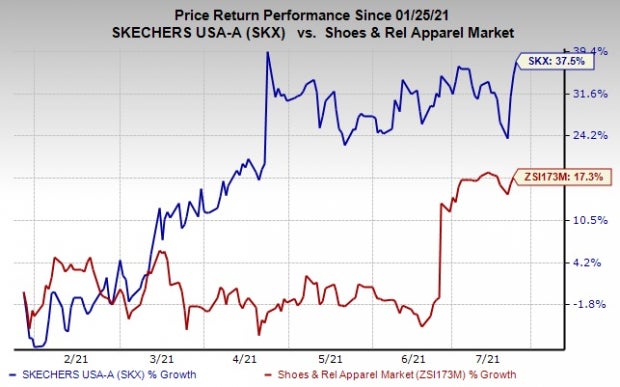 Skechers posted quarterly earnings of 88 cents a share that handily beat the Zacks Consensus Estimate of 52 cents. The bottom line reflects substantial improvement from a loss of 44 cents reported in the year-ago quarter.

The company generated sales of $1,657.8 million that outpaced the Zacks Consensus Estimate of $1,488 million. We note that this was the ninth straight quarter of a revenue beat. The top line surged 127.3% year over year, owing to 147.3% increase in domestic sales and 113.7% rise in international sales. On a constant-currency basis, total sales increased 117.5%.

Sales growth in the domestic and international channels was driven by strong wholesale as well as direct-to-consumer businesses thanks to the easing of pandemic-led restrictions. International wholesale segment sales surged 94.8% to $750.2 million, aided by strong growth in European subsidiaries, China and Distributor sales. Domestic wholesale sales rose 205.7% to $399.7 million on the back of higher unit sales volume.

SG&A expenses were $652.4 million, up 51% year over year. Higher SG&A expenses can be attributed to 119.9% increase in selling expenses and a 39.8% rise in general and administrative expenses. Elevated selling expenses stemmed from a rise in global advertising costs. The increase in general and administrative expenses can be attributed to higher labor costs, incentive compensation, global warehouse and distribution expenses. As a percentage of sales, SG&A expenses contracted 1,988 bps to 39.4%.

Earnings from operations of $201.2 million rose from a loss of $61 million in the prior-year quarter.

As of Jun 30, 2021, the company had 4,057 stores, including 512 company-owned domestic stores, 339 company-owned international locations, 482 joint-venture stores and 2,724 distributor, licensee and franchise stores.

The company opened three stores in the third quarter-to-date period. It plans to open three more stores during the third quarter and 20-25 stores by the end of the year. Additional 145-155 third-party stores are expected to open by year-end.

As of Jun 30, 2021, cash and cash equivalents totaled $1,091.3 million, while Short-term investments amounted to $107.6 million. The company ended the quarter with long-term borrowings (excluding current installments) of $268.9 million, and shareholders’ equity of $2,733.4 million, excluding non-controlling interests of $280.6 million. Further, total inventory was $1,057.3 million.

Management is impressed with the performance witnessed during the second quarter and is confident regarding business growth in the forthcoming periods. It expects that the recent resurgence of the coronavirus will be limited.