The conglomerate delivered better-than-expected earnings in two of the last four quarters, while lagged estimates once and met estimates once, the average earnings surprise being 60.72%. In the last reported quarter, the company reported earnings of 3 cents per share, surpassing the Zacks Consensus Estimate of 2 cents.

In the past three months, shares of the company have lost 6.4% as against the industry’s growth of 3.3%. 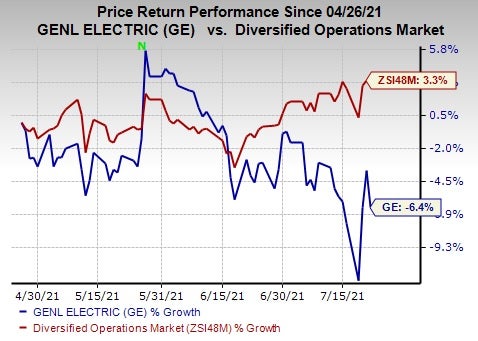 Key Factors and Estimates for Q2

General Electric’s efforts to strengthen its organic growth prospects through better marketing of existing products and focus on innovation are likely to have aided second-quarter performance. A surge in the digital business, technological capabilities, cost-saving actions, aim to lower debts, and synergistic gains from buyouts are expected to have been other tailwinds.

The Zack Consensus Estimate for General Electric’s earnings for the second quarter is pegged at 4 cents, suggesting an improvement from a loss of 15 cents recorded in the year-ago quarter and growth of 33.3% from the sequential figure. The consensus estimate for revenues of $18,273 million suggests a 2.9% increase from the year-ago quarter’s reported figure and 6.7% growth sequentially.

The company expects cash generation in second-quarter 2021 to be better than the year-ago quarter. Improvement in cash flow is expected to have been similar to the first quarter of 2021.

For the Healthcare segment, an improvement in the volume of elective procedures globally and a healthy demand for products (non-pandemic) are likely to have aided the performance. The Zacks Consensus Estimate for Healthcare revenues stands at $4,413 million, implying a 13.3% increase from the prior-year reported figure and 2.4% growth sequentially.

For the Power segment, progress in Power Portfolio and Gas Power businesses are likely to have favored the performance. The Zacks Consensus Estimate for the segment’s revenues is pegged at $4,084 million, suggesting a decline of 1.7% from the year-ago reported figure and 4.2% growth sequentially.

For the Aviation segment, persistent market-related challenges are likely to have played spoilsport in the quarter under review. Efforts to rebound the business are likely to have aided. The Zacks Consensus Estimate for the segment’s revenues is pegged at $5,163 million, indicating a 17.8% increase from the year-ago reported figure and 3.4% growth sequentially.

For the Renewable Energy segment, weak onshore wind markets in the United States and strengthening business internationally along with healthy offshore wind markets are likely to have impacted performance. The revenue estimate for the segment stands at $3,900 million for the second quarter, suggesting 11.3% growth from the year-ago quarter’s reported number and a 20.1% increase from the previous quarter’s figure.

The Zacks Consensus Estimate for the Industrial segment’s (comprising Power, Aviation, Renewable Energy and Healthcare) revenues for the to-be-reported quarter is pegged at $17,560 million, suggesting a 7.7% increase from the year-ago quarter’s reported number and 2.6% growth from the first-quarter figure. Profit for the Industrial segment is likely to be $1,117 million for the second quarter of 2021. Meanwhile, a loss of $922 million was delivered in the year-ago quarter, while a profit of $847 million was recorded in the previous quarter.

Here are some companies that you may want to consider as according to our model, these too have the right combination of elements to beat on earnings this season:

Flowserve Corporation (FLS - Free Report) presently has an Earnings ESP of +3.58% and a Zacks Rank #2. You can see the complete list of today’s Zacks #1 Rank stocks here.