Shares of The Boston Beer Company, Inc. (SAM - Free Report) slumped 18.6% in the after-hours trading session on Jul 22 on lower-than-expected earnings and sales results for second-quarter 2021 and a lowered view for 2021. The bottom line also declined on a year-over-year basis, while the top line grew. Increases in shipment and depletion aided the top line.

However, lower-than-expected sales were attributed to slowed growth in the hard seltzer category and the demand for the Truly brand. This significantly hurt volumes and earnings in the reported quarter.

The company overestimated growth for hard seltzer and the demand for Truly, which resulted in increased production of Truly to meet the anticipated peak in summer demand. However, the lower-than-predicted demand for some of the Truly styles led to excessive inventory levels at its breweries and increased supply-chain costs and complexity. This affected the overall performance in the second quarter and led to a lowered view for 2021.

The company also witnessed a significant reduction in keg demand from the on-premise channel, and higher labor and safety-related costs at its breweries due to the pandemic. In the first half of 2021, it recorded $14.1 million of pandemic-related pre-tax reductions in net revenues and increases in other costs. Of this, $10 million was recorded in the first quarter and $4.1 million in the second quarter. The total costs included a $5.8-million reduction in net revenues, led by estimated keg returns from distributors and retailers, and $8.3 million of other COVID-related direct costs, comprising the cost of goods sold and operating expenses. The company has decided to not report COVID-related direct costs separately in 2021 and beyond, as these are now considered to be a normal part of its operations. 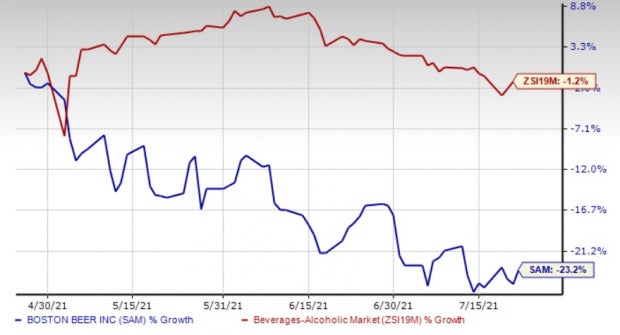 The year-over-year increase in the top line can primarily be attributed to a 27.4% improvement in shipments to 2.45 million barrels. Shipment volume in the first half of 2021 improved at a significantly higher rate than depletions, driven by actions to maintain adequate distributor inventory levels to support demand.

Depletions grew 24%, marking the 13th successive quarter of double-digit growth in depletions. However, depletions growth in the second quarter reflected a marked decline from 48% witnessed in the first quarter. The sequential decline in depletion was mainly attributed to softer-than-anticipated trends in the hard seltzer category and the beer industry.

The company noted that hard seltzer growth was negatively impacted by several factors, including slowed growth of household penetration as the market matures and new trails reduce. Hard seltzer demand was also impacted by the gradual transition to on-premise as hard seltzer has become a regular option in that channel. Newer and increased number of hard seltzer brands at retail outlets have caused an explosion of choices and consumer confusion, resulting in a decline in hard seltzer demand. Hard seltzer depletions were affected by challenging year-over-year comparisons, owing to heightened pantry loading in the year-ago quarter as on-premise restrictions prevailed.

Meanwhile, the year-over-year increase in depletions reflected increases in Truly Hard Seltzer and Twisted Tea, Samuel Adams and Dogfish Head brands, offset by a decline in Angry Orchard. Twisted Tea continued to generate double-digit volume growth and was the fastest-growing malt beverage brand in the measured off-premise channel in the first half of 2021.

The Truly Iced Tea Hard Seltzer rolled out in early 2021 and the recently launched Truly Punch Hard Seltzer continued to attract drinkers looking for bolder flavors. The Truly brand has witnessed market share growth in the measured off-premise channel in the second quarter, outpacing the hard seltzer category by 2.7 times. This has resulted in share gains of 4 percentage points for the Truly brand.

Depletions for the year-to-date period through the 28 weeks ended Jul 10, 2021, have grown nearly 32% from that witnessed in the year-ago period.

Advertising, promotional and selling expenses rose 61.1% in the reported quarter to $161.6 million. The increase was driven by higher brand investments, particularly in media, production and local marketing, and increased freight to distributors, owing to higher volumes and rates.

General and administrative expenses increased 11.1% year over year to $33 million mainly due to a rise in external costs as well as higher salaries and benefits costs.

As of Jun 26, 2021, Boston Beer had cash and cash equivalents of $103 million, and total stockholders’ equity of $1,084.1 million. The company currently has $150 million in its line of credit, which along with its cash position will be sufficient to meet cash requirements.

For 2021, capital spending is now anticipated to be $180-$230 million, backed by the current spending and investment plans. This reflects a decline from $250-$300 million stated earlier.

Given the current softness in hard seltzer and the Truly portfolio sales, Boston Beer lowered its projections for 2021. The company remains uncertain about the performance of the hard seltzer category in the second half of 2021.

For 2021, Boston Beer envisions adjusted earnings per share of $18-$22, excluding the impacts of ASU 2016-09, compared with $22-$26 mentioned earlier. Depletions and shipments are now predicted to increase 25-40% versus 40-50% mentioned earlier. The company continues to expect national price increases of 1-3%.

It retained its gross margin forecast of 45-47%. Investments in advertising, promotional and selling expenses are now expected to be $80-$100 million, marking a decline from $130-$150 million mentioned earlier. The advertising, promotional and selling guidance does not assume any changes in freight costs for the shipment of products to its distributors. Non-GAAP effective tax rate is anticipated to be 26%, excluding the impacts of ASU 2016-09.