Earthstone Energy Inc. (ESTE - Free Report) announced the completion of its previously-announced acquisition of operated oil and gas-producing assets in the Midland Basin from Tracker Resource Development. The company also acquired related well-bore interests in some of the Tracker-operated producing wells from Sequel Energy Group LLC.

The transaction is valued at $126.5 million, including $81.6 million in cash and 6.2 million shares of Class A common stock of Earthstone. The company expects the acquisition to result in an increase in the production by 5,800-6,000 barrels of oil equivalent per day (boe/d) in the second half of 2021.

Earthstone also presented an estimate of mid-year 2021 proved reserves. It provided preliminary production results and operational updates for the second quarter of 2021. Adjusted for the closing of the Tracker acquisition, the company estimated total proved reserves of 133.6 million boe, with a corresponding PV-10 value of $1,677 million.

For second-quarter 2021, Earthstone expects oil and gas sales volumes of 22,716 boe/d, suggesting an increase of 12% from first-quarter reported volumes. Average daily sales volumes are expected to be 25,500-27,000 boe/d. The company’s capital expenditure is expected to be $22.8 million and $32.6 million for the second quarter and the first half of 2021, respectively. Earthstone completed three gross wells on the Hamman 45 pad in Midland County in the Jo Mill, Lower Spraberry and Wolfcamp B zones.

In Midland County, Earthstone expects to complete and turn to sales the recently-drilled 4-well Pearl Jam pad in the third quarter of 2021. In August, the company plans to deploy its second rig, beginning in Upton County. With the addition of the second rig, it will continue to develop its increasing drilling inventory, mainly impacting production volumes in 2022 and beyond.

Headquartered in Denver, CO, Earthstone is an independent oil and gas exploration and production company.

Shares of the company have outperformed the industry in the past six months. The stock has gained 82.7% compared with the industry’s 43.9% growth. 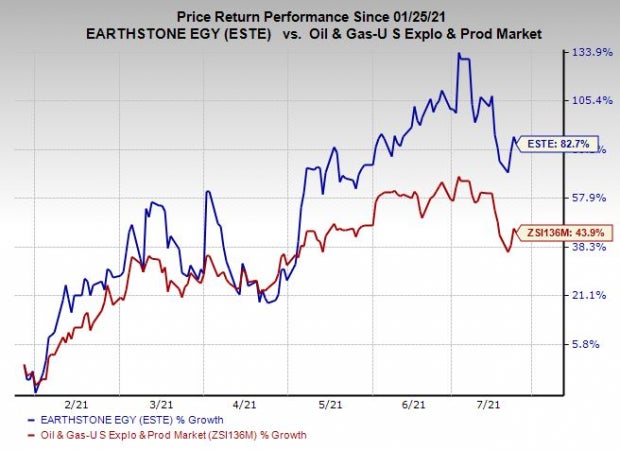 Penn Virginia’s earnings for 2021 are expected to increase 49.2% year over year.

Glaxo (GSK) to Report Q2 Earnings: What's in the Cards?