The company’s shares declined more than 3% in the pre-market trading session on Jul 23. This Zacks Rank #4 (Sell) stock has lost 5.4% in the past year compared with the industry’s decline of 1.9%.

Adjusted earnings came in at $1.47 per share, which fell short of the Zacks Consensus Estimate of $1.73. Moreover, the bottom line declined considerably from $2.20 per share in the year-ago quarter.

Kimberly-Clark’s sales came in at $4,722 million, which missed the Zacks Consensus Estimate of $4,782 million. Nonetheless, net sales advanced 2% year over year. Favorable currency movements lifted sales by 3%. The net effect of the Softex Indonesia buyout and business exits related to the company’s 2018 Global Restructuring Program boosted the top line by 2%. Organic sales fell 3%, with volumes down 4%. The combined impact of changes in net selling prices and product mix boosted sales by about 1%.

In North America, organic sales in consumer products fell 11%, while it declined 4% in the K-C Professional segment. Volumes in North America, especially consumer tissue, were hurt by destocking by consumers and retailers, after the stock hoarding which took place earlier due to the pandemic. Internationally, organic sales climbed 1% across developed markets and 9% in developing and emerging (D&E) markets.

Adjusted operating profit came in at $676 million, down from $1,012 million in the year-ago quarter, thanks to a rise in input costs (to the tune of $345 million) and reduced sales volumes. Increased pulp, other materials and distribution costs led to a rise in input costs. Also, a rise in other manufacturing costs like inefficiencies from lower production volumes caused the downside. Nevertheless, these were somewhat offset by increased net selling prices and cost savings of $115 million and $30 million from the FORCE (Focused On Reducing Costs Everywhere) program and the 2018 Global Restructuring Program, respectively. 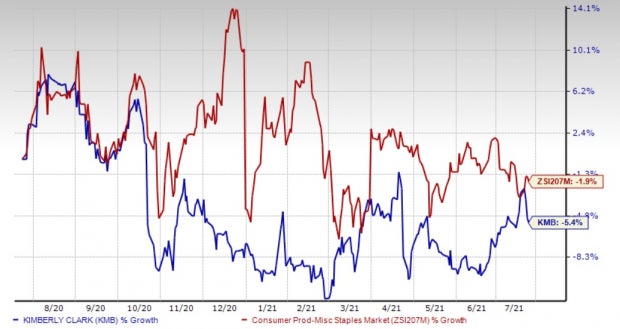 Consumer Tissue: Segment sales of $1,424 million fell 13% year over year, including a nearly 3% positive impact from currency rates. Volumes fell 15% due to lower shipments in North America, which in turn stemmed from category softness with retailers curtailing inventory and consumers cutting down at-home consumption and pantry loading. Sales fell 26% in North America, while it grew 9% in D&E markets. The metric inched up 1% in developed markets outside North America.

The company ended the quarter with cash and cash equivalents of $306 million, long-term debt of $7,591 million and total stockholders’ equity of $758 million. Kimberly-Clark generated cash from operating activities of $565 million during the quarter under review. Management incurred capital expenditures of $201 million. In 2021, the company now expects capital spending of $1,100-$1,200 million compared with $1,200-$1,300 million expected earlier.

Kimberly-Clark repurchased 1.2 million shares for $161 million in the second quarter. The company plans to buy back shares worth $400-$450 million in 2021 compared with the earlier targeted range of $650-$750 million.

The company is on track with the 2018 Global Restructuring Program, which is focused on lowering its structural costs and improving financial flexibility. The program is anticipated to be concluded in 2021. As part of this initiative, the company plans to sell or exit some low-margin businesses that deliver about 1% of net sales. Notably, Kimberly-Clark generated cumulative savings of $495 million from this program, until the second quarter of 2021. Management anticipates annual pre-tax cost savings of $540-$560 million from this program by 2021-end.

Kimberly-Clark’s second-quarter performance reflects continued volatility induced by the coronavirus pandemic. The company is encountering considerably escalated input costs, along with a reversal of consumer tissue volumes. Consumer tissue volumes are declining from the record jump in the year-ago period, with retailers and consumers in North America curtailing inventory and at-home stocking. That said, the company is focused on undertaking relevant pricing actions to counter inflation and efficiently manage costs.

Kimberly-Clark remains encouraged about its strategy as well as its fundamental brand performance. The company’s personal care business is doing well and management remains focused on enhancing its position in key markets, alongside delivering solid growth in D&E markets. Apart from these, the company is committed to executing its K-C Strategy 2022. However, management lowered its 2021 outlook due to a tough near-term environment.

Net sales in 2021 are now expected to grow 1-4% year over year. Earlier, management had anticipated the metric to increase 3-5%. Organic sales growth is now expected to be flat to 2% down compared with flat to 1% up forecasted before. Currency movements are still expected to be favorable by 1-2%. The Softex Indonesia buyout is still likely to boost sales by 2% and business exits related to the 2018 Global Restructuring Program are expected to slightly weigh on sales.

Medifast (MED - Free Report) has a Zacks Rank #2 (Buy) and its bottom line outpaced the Zacks Consensus Estimate by 12.7% in the trailing four quarters, on average.