Kinross (KGC) to Report Q2 Earnings: What's in the Cards?

Kinross Gold Corporation (KGC - Free Report) is set to release second-quarter 2021 results after the bell on Jul 28. Benefits of higher gold prices are expected to reflect on its second-quarter results. 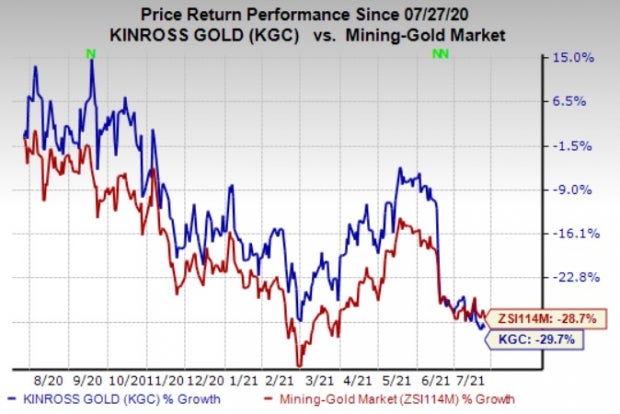 The Zacks Consensus Estimate for second-quarter consolidated revenues for Kinross is currently pegged at $1,021 million, which calls for a rise of 1.4% year over year.

The Zacks Consensus Estimate for Kinross’ second-quarter gold equivalent production is currently pegged at 572,000 ounces, flat on a year-over-year basis.

Benefits of higher year-over-year gold prices are likely to reflect on the company’s results in the to-be-reported quarter. Gold had a stellar run in 2020 riding on the ultra-low interest rate environment, geopolitical tensions and fears over supply crunch stemming from suspensions of operations by miners amid the pandemic.

However, the yellow metal lost the momentum this year, largely due to vaccine rollouts and optimism over economic recovery. Gold prices dipped below $1,700 per ounce to the lowest level in nine months in early March 2021 on a strong U.S. dollar and an uptrend in treasury yields. Nevertheless, gold rallied 11% in April and May, ending above $1,900 per ounce driven by apprehensions over inflation, a weaker dollar, higher central bank demand and holiday and wedding related purchases in China. Gold prices, however, retreated in June and dropped 7% for the month to below $1,800 per ounce on a hawkish Federal Reserve outlook and a rebound in dollar.

Despite the pullback in June, the company’s second-quarter results are expected to reflect the benefits of higher year-over-year gold prices. Notably, Kinross’ averaged realize price of gold rose 13% year over year in the first quarter. The trend is likely to have continued in the second quarter and supported its margins.

The company is also expected to have benefited from higher production at Paracatu and Fort Knox mines in the June quarter. However, production at Round Mountain is likely to have impacted by certain geotechnical issues.

Moreover, the temporary suspension of milling operations at the Tasiast mine is expected to have somewhat impacted its second-quarter production. Kinross suspended operations at the mine due to a fire that occurred on Jun 15. The company reported, on Jun 21, that it has resumed mining activities at the mine, including stripping to access higher grade ore.  Kinross also reduced its 2021 production guidance to 2.1 million gold equivalent ounces from 2.4 million gold equivalent ounces it projected in Feb 2021.

Our proven model does not conclusively predict an earnings beat for Kinross this season. The combination of a positive Earnings ESP and a Zacks Rank #1 (Strong Buy), 2 (Buy) or 3 (Hold) increases the chances of an earnings beat. But that’s not the case here.

Earnings ESP: Earnings ESP for Kinross is -0.70%. The Zacks Consensus Estimate for earnings for the second quarter is currently pegged at 12 cents. You can uncover the best stocks to buy or sell before they’re reported with our Earnings ESP Filter.

LyondellBasell Industries N.V. (LYB - Free Report) , scheduled to release earnings on Jul 30, has an Earnings ESP of +6.99% and sports a Zacks Rank #1. You can see the complete list of today’s Zacks #1 Rank stocks here.

Westlake Chemical Corporation (WLK - Free Report) scheduled to release earnings on Aug 3, has an Earnings ESP of +1.50% and carries a Zacks Rank #2.

Eastman Chemical Company (EMN - Free Report) , scheduled to release earnings on Aug 2, has an Earnings ESP of +0.90% and carries a Zacks Rank #3.