Pembina Pipeline Corporation (PBA - Free Report) terminated its all-stock takeover agreement with Inter Pipeline Ltd. as the latter’s board of directors notified that it would no longer recommend shareholders to vote in favor of the deal.

As a result of the termination, Pembina will receive the C$350-million termination fee provided for in the agreement from the Canada-based pipeline operator, Inter Pipeline.

The decision came months after Pembina entered an agreement to acquire Inter Pipeline in a C$8.3-billion all-stock deal. Per the terms of the deal, Inter Pipeline shareholders would have received half a share in Pembina for each of its shares they hold. Notably, the transaction would have formed one of the largest energy infrastructure companies in Canada.

However, the deal was struck by a hostile takeover bid from Brookfield Infrastructure Partners, which Inter Pipeline claimed to have undervalued its business. As a result, Inter Pipeline rejected Brookfield’s C$7.1 billion takeover offer.

Since then, Brookfield had been attempting to break Inter Pipeline’s all-stock merger deal with Pembina. Hence, the partnership made a revised offer with a cash consideration of C$20 or 0.25 of Brookfield class A share for each Inter Pipeline common share.

Inter Pipeline decided to seek a higher bid from Brookfield as the latest offer looked beneficial, with better chances of regulatory approval. Inter Pipeline mentioned that its board of directors is open to negotiate a mutually agreeable transaction with Brookfield.

On its part, Pembina will continue to seek opportunities for growth through focused acquisitions. The company remains optimistic about its future, including the profitability of its existing business, and to obtain a rising and broader range of growth opportunities.

Headquartered in Calgary, Canada, Pembina is an energy transportation and service provider.

Shares of the company have outperformed the industry in the past six months. Its stock has gained 23.8% compared with the industry’s 18.2% growth. 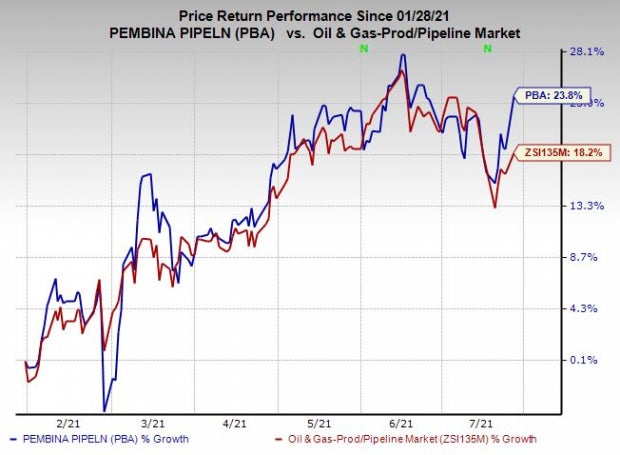 PDC Energy’s earnings for 2021 are expected to increase 19.5% year over year.

What's in the Cards for Ares Capital (ARCC) in Q2 Earnings?