Mondelez International, Inc. (MDLZ - Free Report) reported second-quarter 2021 numbers, wherein both top and bottom lines increased year over year and the former came ahead of the Zacks Consensus Estimate. The company continued witnessing solid performances in most regions, brands and categories, as it remains committed to undertaking efforts to solidify its position. Concurrently, management announced a dividend hike.

The company remains optimistic about delivering growth in the long run. For 2021, Mondelez pulled up its organic net revenue growth guidance, while reiterating the bottom-line growth view. We note that the company is seeing greater-than-expected commodity cost inflation, alongside encountering high logistic and labor costs.

Adjusted earnings came in at 66 cents per share, which climbed 1.6% year over year on a constant-currency or cc basis. The metric came in line with the Zacks Consensus Estimate. Adjusted earnings growth was backed by operating gains and reduced outstanding shares, somewhat offset by increased taxes.

Net revenues advanced 12.4% to $6,642 million and surpassed the Zacks Consensus Estimate of $6,454 million. The upside was driven by strong organic net revenue growth of 6.2% as well as increased sales from the Hu, Grenade and Gourmet Food buyouts.

Revenues from emerging markets increased 19.6% to $2,293 million, while the same increased 16.5% on an organic basis. During the quarter, it saw double-digit growth in India, Brazil, Mexico and Russia, as well as a high-single-digit improvement in China.

Management remains encouraged by the underlying emerging market strength. Revenues from developed markets rallied 8.9% to $4,349 million, while the same inched up 1.3% on an organic basis. Solid consumption trends led to the upside in developed markets. 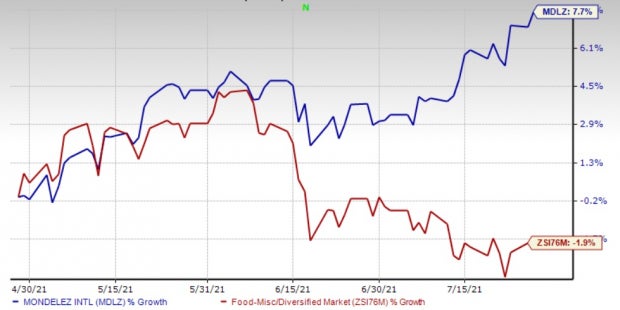 Mondelez, which shares space with The Kraft Heinz Company (KHC - Free Report) , ended the quarter with cash and cash equivalents of $1,938 million, long-term debt of $17,046 million and total equity of $27,620 million. The company generated net cash from operating activities of $1,792 million during the six months ended Jun 30, 2021.

During the second quarter, the company distributed $900 million to shareholders through cash dividends and share buybacks. Concurrent to its earnings release, management announced an 11% hike in quarterly cash dividend, taking it to 35 cents per share on its Class A common stock. This is payable on Oct 14, 2021, to shareholders of record as of Sep 30.

Mondelez remains focused on revenue growth management capacity, including simplification and pricing initiatives especially to combat commodity, logistics and labor cost inflation. Management, in fact, envisions these costs to further increase in the second half of 2021. While Mondelez is focused on managing these costs, it also anticipates some pressure points during the second half of 2021.

It remains committed to making brand investments. Further, it is on track with reshaping the portfolio to elevate its focus on the snacking category. In this regard, the company in the second quarter announced a deal to acquire Chipita. A robust first-half performance encouraged management to raise its organic net revenue growth guidance for 2021.

Mondelez now projects organic net revenues to increase more than 4% in 2021, up from above 3% growth expected earlier. The updated guidance indicates at least 3% growth in the second half of 2021.

Management still anticipates adjusted earnings per share (EPS) to grow in high-single digits at cc. Its 2021 guidance reflects expectations of a more-than-normal level of pandemic-led volatility.

Favorable currency rates are expected to increase net revenues by nearly 2%, while adjusted EPS is likely to see a positive impact of 9 cents by the same.

Shares of the Zacks Rank #3 (Hold) company have increased 7.7% in the past three months against the industry’s decline of 1.9%.

Medifast (MED - Free Report) has a Zacks Rank #1 and its bottom line outpaced the Zacks Consensus Estimate by 12.7% in the trailing four quarters, on average.