U.S. telecom stocks witnessed a steady uptrend in the past five trading days buoyed by better-than-expected earnings performance from hitherto reported companies. The industry appears to have been benefited from a faster pace of 5G deployment and rapid proliferation of IoT devices amid rising work-from-home trend. The $1.2 trillion infrastructure bill also cleared the procedural vote in the Senate as the bipartisan group of lawmakers gave approval for the bill to move forward. This appeared to spur optimism about the economic revival and triggered an uptrend.

After months of painstaking negotiations, the Senate approved the economic package to rebuild the crumbling infrastructure of the country, which is the core of the multi-billion infrastructure investment plan by President Biden. This includes a $65 billion provision to significantly expand broadband access to Americans, as the administration aims to fortify its technological prowess to thwart the dominance of countries like China. The plan envisions reaching the underserved areas of the country and prioritizing support for broadband networks affiliated with local governments, nonprofit organizations and cooperatives to encourage strong competition with privately-owned companies. The plan has also earmarked funds for the tribal areas that lack access to high-speed Internet. It is likely to lower the prices for Internet services by requiring funding recipients to offer a low-cost affordable plan and encourage price transparency.

Meanwhile tense undercurrents continued to build up as high level diplomats from the United States and China held talks over wide-ranging issues including human rights abuses in Xinjiang and Tibet, Beijing’s crackdown in Hong Kong and Washington’s ties with Taiwan. The face-to-face interaction apparently failed to break the stalemate between the two warring countries, with a top diplomat from the communist nation accusing the Biden administration of pursuing a double-barreled strategy of confrontation and cooperation with Beijing in order to suppress China. Although this threatened to offset the industry tailwinds, solid quarterly earnings results from hitherto-reported sector participants provided confidence to the beleaguered industry.

Excluding non-recurring items, adjusted earnings were 89 cents per share compared with 83 cents in the year-earlier quarter. Adjusted earnings in the second quarter beat the Zacks Consensus Estimate by 11 cents. Quarterly GAAP operating revenues increased 7.6% year over year to $44,045 million, largely due to higher equipment sales within the Mobility business and growth in advertising and subscription-based revenues within WarnerMedia. The top line beat the consensus mark of $42,649 million.

2.     Qualcomm Incorporated (QCOM - Free Report) reported solid third-quarter fiscal 2021 results driven by the ramp-up in 5G-enabled chips and surge in demand for essential products and services that are the building blocks for digital transformation in the cloud economy. Both the bottom line and the top line increased year over year, backed by the strength of the business model and the ability to respond proactively to the evolving market scenario.

Quarterly non-GAAP net income came in at $2,200 million or $1.92 per share compared with $982 million or 86 cents per share in the year-ago quarter. Undeterred by the supply chain adversities, the non-GAAP earnings per share were largely driven by higher revenues across the board. The bottom line exceeded management’s guidance and beat the Zacks Consensus Estimate by 25 cents. Non-GAAP revenues in the reported quarter were $7,995 million compared with $4,890 million in the year-earlier quarter. The figure beat the consensus mark of $7,576 million, driven by 5G strength, high-performing core chipsets and new RF front-end content.

Core net income came in at $459 million or 53 cents per share compared with $218 million or 25 cents per share in the year-ago quarter. The improvement was driven by higher sales and expanded margins. The bottom line beat the Zacks Consensus Estimate by 2 cents. Quarterly GAAP net sales increased 36.7% year over year to $3,501 million, driven by strong sales growth at all five business segments. Core sales grew to $3,504 million from $2,588 million. The top line surpassed the consensus estimate of $3,403 million. 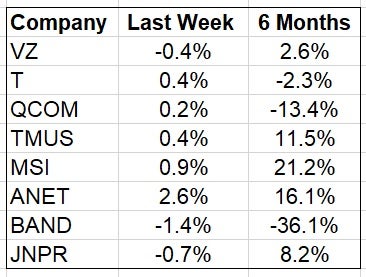 In the past five trading days, Arista has been the best performer with the stock gaining 2.6%, while Bandwidth declined the most with its stock falling 1.4%.

Over the past six months, Motorola has been the best performer with its stock appreciating 21.2%, while Bandwidth declined the most with its stock falling 36.1%.

Over the past six months, the Zacks Telecommunications Services industry has gained 13.6% while the S&P 500 has rallied 17.4%. 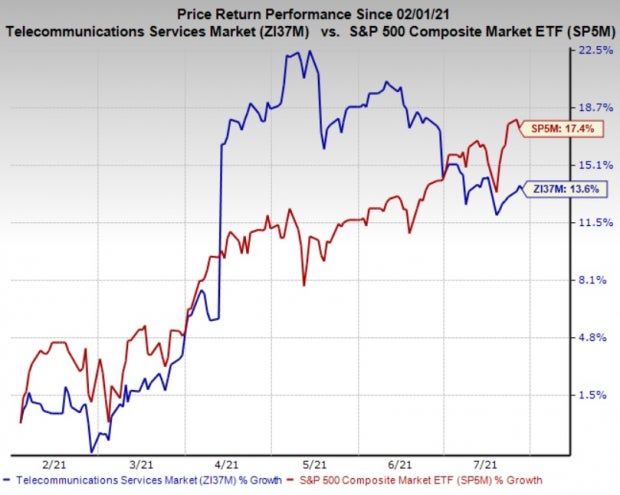 In addition to 5G deployments and product launches, all eyes will remain glued to how the rest of the telecom stocks fare in the quarterly earnings, with the administration continuing to implement key policy changes to safeguard the interests of the industry.