Altria Group Inc. (MO - Free Report) came out with second-quarter 2021 results, with the top and the bottom line surpassing the Zacks Consensus Estimate as well as increasing year over year.

The company’s performance gained from higher pricing across categories, which in turn boosted revenues. It also witnessed growth in shipment volumes. Altria’s oral tobacco category witnessed growth in on! oral nicotine pouches. Management is impressed with the company’s strong financial performance in the first half of 2021. That said, the company raised the lower end of its adjusted earnings view for 2021. The guidance reflects the company’s continued confidence in its tobacco business, investments in smoke-free products arena and the expected impact of the sale of Ste. Michelle Wine Estates business.

Adjusted earnings came in at $1.23 per share, which surpassed the Zacks Consensus Estimate of $1.17. The bottom line rose 12.8% year over year owing to higher adjusted operating companies income (OCI).

Net revenues increased 8.9% year over year to $6,936 million. Revenues, after deducting excise taxes, were up 10.9% to $5,614 million. The Zacks Consensus Estimate for revenues was pegged at $5,362 million. The company’s top-line performance gained from growth in net revenues across all segments.

Smokeable Products: Net revenues in the category increased 8% year over year to $6,050 million due to higher pricing and shipment volumes, partly offset by rise in promotional investments. Revenues, net of excise taxes, were up 9.9% year over year to $4,769 million.

Wine: Net revenues in the segment rose 27.5% year on year to $167 million due to increased shipment volume and improved mix. The segment’s revenues, net of excise taxes, increased 28.6% to $162 million. Reported wine shipment volumes went up 9.5% to about 3.6 million cases.

Altria ended the quarter with cash and cash equivalents of $1,877 million, long-term debt of $28,241 million and total stockholders’ equity of $3,259 million. In May 2021, the company paid back $1.5 billion of its senior unsecured notes.

During the quarter, the company paid out dividends worth $1.6 billion. The company currently has an annualized dividend rate of $3.44 per share. Notably, the company maintains a long-term dividend payout ratio goal of about 80% of the adjusted earnings per share. 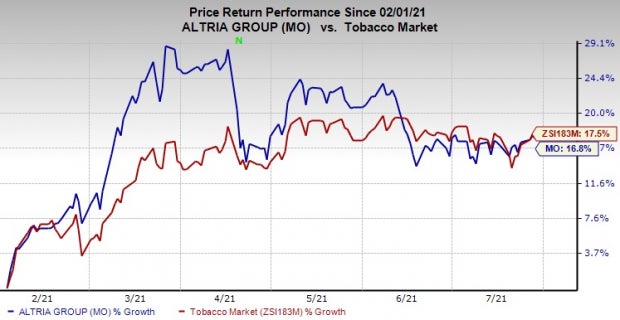 In the second quarter, Helix achieved unrestricted manufacturing capacity for on! in the U.S. market. Helix plans to enhance the capacity for on! ahead of expected demand. As of Jun 30, 2021, Helix expanded its distribution of on!, to 105,000 stores.

In July, Altria through its subsidiary — UST LLC — signed an agreement to divest Ste. Michelle Wine Estates (Ste. Michelle) business to private equity firm, Sycamore Partners Management, L.P. The transaction, which is likely to conclude in the second half of 2021, is priced at $1.2 billion on a cash basis and the assumption of specific Ste. Michelle liabilities. Altria expects to utilize the net proceeds arising from the deal for additional share buybacks. The deal enables the company to enhance the transition of adult smokers to a non-combustible future.

Apart from these, Altria noted that until now, its tobacco business has not witnessed any material disruption related to the government’s restrictions on consumer movements and business operations. However, the company continues to assess the macroeconomic impacts of the pandemic on adult tobacco consumers (ATCs), such as stay-at-home trends, disposable income and buying patterns.

For 2021, the company updated its expectation for adjusted earnings in the range of $4.56-$4.62 from $4.49-$4.62. The revised bottom-line view indicates growth of 4.5-6% from $4.36 recorded in 2020. The guidance takes into consideration the recently-announced Ste. Michelle Transaction. Management stated that the company will continue assessing the external environmental factors like ATC dynamics, unemployment rates, buying power as well as the timing and breadth of the coronavirus vaccine, among others.

We note that shares of this Zacks Rank #3 (Hold) company have gained 16.8% in the past six months compared with the industry’s growth of 17.5%.