The company noted that trends across its business units and markets have been improving, owing to the easing of restrictions. Though the improvement was not linear across markets or segments; the company seems to be well-positioned compared with the prior-year quarter in all its units and also better than second-quarter 2019 in some units.

Net consolidated income for the largest franchise bottler for The Coca-Cola Company (KO - Free Report) was Ps. 5,255 million (US$262.1 million) compared with a significant loss reported in the year-ago quarter. The improvement can primarily be attributed to robust income from operations across all units and increased participation in Heineken’s (HEINY - Free Report) results. This was partly offset by a non-cash foreign currency loss linked to FEMSA’s U.S. dollar-denominated cash position, which was impacted by the appreciation of the Mexican Peso in the quarter.

Top-line growth was mainly driven by a recovery in consumption in the second quarter as consumers returned to stores with the lifting of mobility bans. Strong sales growth across all business units also contributed to growth.

The company witnessed an increased demand for all products categories, including thirst, hunger, and the occasional treat. The demand for some categories, which gained momentum amid the lockdowns — including pantry and spirits — continued unabated. Momentum continued in the Health Division, while the Fuel Division ("OXXO Gas") reported improved trends despite lower vehicle mobility in Mexico. The Logistics and Distribution unit witnessed a strong performance, even though the recovery in Latin America remains slow-paced compared with the United States. Revenues for Coca-Cola FEMSA S.A.B. de C.V. (KOF - Free Report) remained strong, driven by a strong performance across markets.

Shares of the company rallied 5% yesterday, following the positive business trends reported in the second quarter. Shares of the Zacks Rank #3 (Hold) company have gained 12.2% in the past three months compared with the industry’s growth of 7.1%. 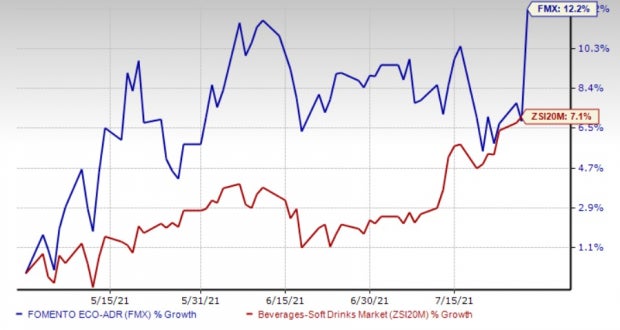 FEMSA’s operating income (income from operations) was up 87.4% to Ps. 13,973 million (US$696.9 million). On an organic basis, operating income improved 84.9%. Consolidated operating margin expanded 370 bps to 10.2%, driven by steady recovery across all units and an easy comparison base from second-quarter 2020, which was the peak of the pandemic-related containment measures and restrictions. Operating margin benefited from margin growth across all segments.

FEMSA Comercio — Proximity Division: Total revenues for the segment rose 17.1% year over year to Ps. 50,850 million (US$2,536.2 million). The increase can primarily be attributed to a 15.6% rise in same-store sales on 7.4% growth in-store traffic due to increased customer mobility and easing of restrictions, and 7.6% growth in average ticket. In the reported quarter, the company’s OXXO store base increased by 128 stores. Consequently, FEMSA Comercio’s Proximity division had 19,834 OXXO stores as of Jun 30, 2021. Operating income accelerated 188.4% year over year, while operating margin expanded 540 bps to 9%, owing to higher operating leverage.

FEMSA Comercio — Health Division: The segment reported total revenues of Ps. 18,377 million (US$916.6 million), up 17.6% year over year. Revenues benefited from positive trends in Mexico, Chile and Colombia operations, offset by negative currency translations. Same-store sales for drugstores increased 14.9%. On a currency-neutral basis, total revenues increased 18.9%, while same-store sales increased 21.6%. The segment had 3,459 points of sales across all regions as of Jun 30, 2021. Operating income improved 109.1% year over year, while operating margin expanded 250 bps to 5.7%. The increase in operating income resulted from the Health Division’s higher operating leverage. Additionally, results were aided by tight expense control and efficiency across operations.

Logistics and Distribution: Total revenues for the segment were Ps. 11,266 million (US$561.9 million). Revenues reflected positive demand trends across Latin America as well as recovery in most end-user segments in the United States. However, negative currency translations affected results. The segment’s operating income was Ps. 586 million (US$29.2 million), with 5.2% of operating margin.