Total revenues were up 31% on a reported basis and 25% at CER to $8.22 billion in the quarter, driven by higher product sales. Revenues beat the Zacks Consensus Estimate of $7.79 billion.

Excluding COVID-19 vaccine sales, total revenues were up 12% at CER.

Shares of AstraZeneca were up 1.7% in pre-market trading on Jul 29, following the announcement of second-quarter results. So far this year, the company’s shares have gained 13.6% compared with an increase of 11.6% for the industry. 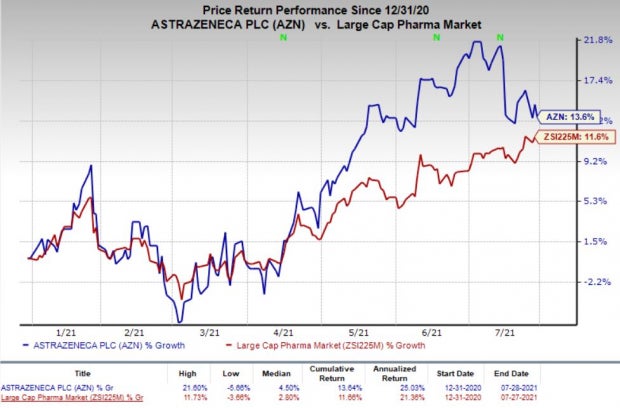 Product sales rose 27% at CER to $8.1 billion driven by higher sales of new medicines across Oncology and BioPharmaceuticals segments, including relatively newer medicines — Tagrisso and Farxiga.

Collaboration revenues were $175 million, down 23% at CER.

In Oncology, Lynparza product revenues rose 2% year over year to $588 million on the back of launches in different countries. The drug is the leading PARP-inhibitor drug in the United States. AstraZeneca markets Lynparza in partnership with Merck (MRK - Free Report) .

Tagrisso recorded sales of $1.31 billion, up 21% year over year on strong demand as an adjuvant therapy for treating lung cancer patients.

Imfinzi generated sales of $604 million in the quarter, up 19% year over year on strong demand for advanced lung cancer patients.

Sales of legacy cancer drugs — Iressa, Arimidex, Faslodex and Casodex — declined during the quarter. However, sales of Zoladex were up 5%.

In CVRM, Brilinta/Brilique sales were $375 million in the reported quarter, down 18% year over year, primarily reflecting adverse impact of China’s volume-based procurement program.

Farxiga recorded product sales of $734 million in the quarter, up 56% year over year, reflecting growth across all regions. Bydureon sales decreased 20% to $95 million. Sales of Seloken increased 14% to $266 million.

In Respiratory & Immunology, Symbicort sales declined 1% in the quarter to $680 million. Pulmicort sales gained 59% to $167 million.

Fasenra recorded sales of $320 million in the quarter, up 36% year over year, reflecting recovery in new patient starts.

Bevespi, a LAMA/LABA in a pressurized metered dose inhaler, recorded sales of $13 million in the quarter, up 33% year over year.

In Other Medicines, sales of Nexium declined 14% to $336 million while sales of Synagis and Seroquel declined 73% and 19% to $24 million and $21 million, respectively.

AstraZeneca provided updated financial guidance to include the impact of the Alexion acquisition. The company completed the acquisition of Alexion Pharmaceuticals earlier this month.

The guidance does not include any future sales from the COVID-19 Vaccine.

However, AstraZeneca stated that it expects pandemic-led uncertainty to continue going forward.