2. Southwest Airlines incurred a second-quarter 2021 loss (excluding 92 cents from non-recurring items) of 35 cents per share in the second quarter of 2021, wider than the Zacks Consensus Estimate of a loss of 21 cents. The carrier anticipates operating revenues to decline 10-15% in July from the level reported in the same period of 2019. The same for August is expected to be down 12-17%. Load factor (% of seats filled by passengers) is expected to be 85% and 80% in July and August, respectively. The airline estimates economic fuel costs per gallon in the range of $2.05-$2.15 for both the third and the fourth quarter.

3. Alaska Air Group, the parent company of Alaska Airlines, incurred a loss (excluding $3.45 from non-recurring items) of 30 cents per share, narrower than the Zacks Consensus Estimate of a loss of 31 cents. In the year-ago quarter, the company incurred a loss of $3.54 per share. Operating revenues of $1,527 million skyrocketed 262.71% year over year.

4. JetBlue Airways incurred a second-quarter 2021 loss (excluding 84 cents from non-recurring items) of 64 cents per share, comparing favorably with the Zacks Consensus Estimate of a loss of 73 cents.The bottom line was also narrower than the year-ago loss of $2.02. Revenues for the third quarter of 2021 are expected to decline in the 4-9% range from the third-quarter 2019 actuals. Capacity is anticipated to be either flat or decline up to 3% in the September quarter from the figure reported in the third quarter of 2019. Average fuel cost per gallon in the September quarter is estimated to be $2.09.

Passenger revenues (contributing 86.7% to the top line) surged to $356.3 million from a mere $29.8 million a year ago as more people took to the skies following the ramp-up in vaccination. Airline traffic, measured in revenue passenger miles, surged in excess of 800% year over year to 1,723 million in the quarter under review. Capacity (measured in available seat miles) expanded even more to 3,546 million as the airline increases the same to meet the uptick in demand. Load factor expanded 54.8 percentage points to 78%. Passenger revenue per ASM (PRASM) ascended 38.2% to 10.05 cents. Average fuel cost per gallon (economic) rose to $1.89 from $1.26 a year-ago. 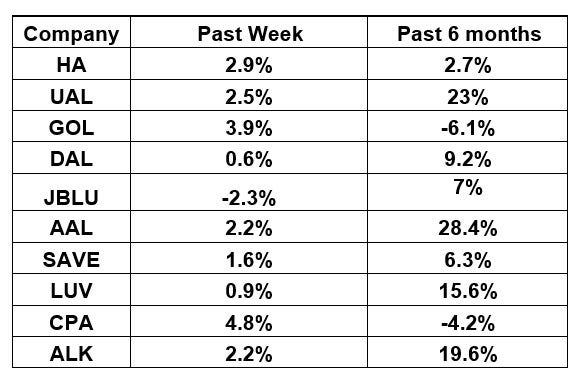 Investors will keenly await the second-quarter 2021 earnings report of Copa Holdings (CPA - Free Report) , scheduled to be released on Aug 4.