Sally Beauty Holdings, Inc. (SBH - Free Report) reported impressive third-quarter fiscal 2021 results, with the top and the bottom line beating the Zacks Consensus Estimate as well as increasing year over year. Sales increased across both the segments in which the company operates.

Sally Beauty reported adjusted earnings of 68 cents per share, which surpassed the Zacks Consensus Estimate of 62 cents. The metric compares favorably against a loss of 11 cents reported in the year-ago quarter. The upside can be attributed to solid top-line growth and better gross margin performance.

The company reported selling, general and administrative (SG&A) expenses of $386.5 million, which increased $71.9 million mainly due to impacts of the year-ago quarter’s savings from furloughed employees, rent abatements and reduced advertising costs. As a percentage of sales, SG&A expenses were 37.8%, down from 44.6% posted in the prior-year quarter. Management was impressed with its massive expense leverage in the quarter under review.

Net store count at the end of the quarter was 3,611, lower by 80 stores from the year-ago quarter’s level.

The company ended the reported quarter with cash and cash equivalents of $270.3 million, long-term debt including capital leases of $1,383.1 million and total stockholders’ equity of $222.3 million.

During the third quarter, cash flow from operations was $86.2 million, while capital expenditures amounted to $17.8 million.

The company notified that it is maintaining a cautious view owing to an uncertain environment, supply chain disruptions and potential restrictions as well as closures amid the pandemic. The company expects fiscal fourth-quarter net sales to be flat or up 2% year over year. 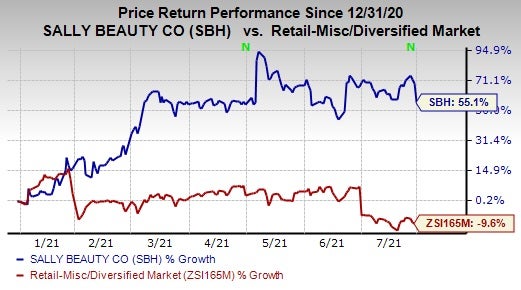 Shares of this Zacks Rank #2 (Buy) company have surged 55.1% so far this year against the industry’s decline of 9.6%.