Revenues in the reported quarter were $397.5 million, up 1% from the prior-year period. Growth in contract development and manufacturing (“CDMO”) services revenues were almost completely offset by loss of sales of anthrax and smallpox vaccines. The top line also missed the Zacks Consensus Estimate of $415.73 million.

Shares of Emergent declined 4.5% during after-hours trading on Jul 30, following lower-than-expected second-quarter results. In fact, the company’s shares have declined 27.2% so far this year against the industry’s increase of 0.3%. 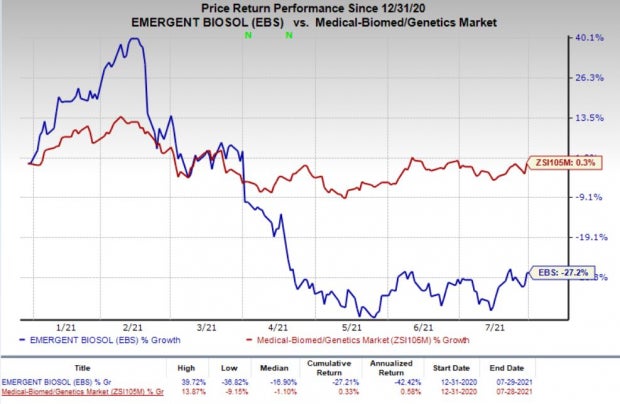 Total product sales decreased 39% from the year-ago quarter to $181.2 million.

Notably, sales of anthrax vaccines (BioThrax and AV7909) were $51.5 million in the reported quarter, decreasing 61% year over year. The decrease in sales of anthrax vaccines was due to timing of deliveries to the U.S. government. Emergent did not report any sales for its smallpox vaccine, ACAM2000, as no deliveries to the U.S. government were scheduled during the quarter. The company had reported revenues of $70 million from ACAM2000 in the year-ago quarter.

Other product sales were almost flat year over year at $23.5 million.

Revenues from contracts and grants increased 8% year over year to $25.4 million.

CDMO services revenues jumped more than 160% year over year to $190.9 million. The increase was on the back of contributions for services provided to partners engaged in developing COVID-19 vaccines or therapy, especially the Biomedical Advanced Research and Development Authority (BARDA).

The company recorded adjusted EBITDA of $173 million in the reported quarter, up 1% compared from the prior-year quarter.

Emergent maintained its revenue guidance for 2021 in the range of $1.7-$1.9 billion. The Zacks Consensus Estimate for total revenues stands at $1.81 billion.

Emergent anticipates adjusted net income within $395-$470 million. Adjusted EBITDA is anticipated in the range of $620-$720 million.

In a separate press release, Emergent announced that the FDA has allowed the company to resume its production activities related to J&J’s (JNJ - Free Report) COVID-19 vaccine at the Bayview manufacturing facility. However, the site will continue to be under routine inspections by the FDA.

Please note that the company had to halt production at the facility on FDA’s request in mid-April as the regulatory authority began inspection to investigate the error that led to manufacturing of faulty doses of J&J’s COVID-19 vaccine in March. Reportedly, Emergent had mixed up doses of AstraZeneca’s (AZN - Free Report) COVID-19 vaccine with J&J’s vaccine.