Amazon.com (AMZN - Free Report) reported second-quarter 2021 earnings of $15.12 per share, beating the Zacks Consensus Estimate by 23.7%. The bottom line also improved 46.8% from the year-ago quarter but declined4.2% from the previous quarter.

Strong momentum across Prime members remained a tailwind. The company witnessed strong growth in its subscription services in the reported quarter. Sales from these services went up 28% from the prior-year quarter to $7.9 billion.

The company’s continued momentum in online sales remained a positive. In the second quarter, online store sales rose 16% from the prior-year quarter to $53.15 billion.

Notably, the company’s shares plunged 7% in the pre-market trading, which can be attributed to its lower-than-expected second-quarter sales. Also, the mid-point of the company's guided range for third-quarter sales falls below the consensus estimate.

Coming to the price performance, Amazon has returned 2.5% on a year-to-date basis against the industry’s decline of 19.5%. 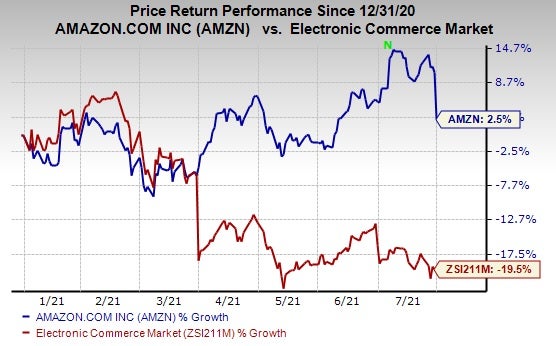 The company’saggressive retail strategies continued to aid its second-quarter results.

The opening of Amazon Fresh supermarket with the “Just Walk Out” cashierless technology in Bellevue, WA, expanded its grocery retail efforts. Increasing number of Amazon Fresh stores, which currently stands at 15 in the United States and the U.K., remained noteworthy.

In regard to fashion retail, expanding head-to-toe outfit recommendations, which are now available on the Fashion product pages in the United States, Germany, France, India, Italy and Spain, have bolstered Amazon Fashion’s global footprint.

The company strengthened its pharma retail efforts by introducing a six-month supply option for eligible medications on Amazon Pharmacy.

In addition to these, Amazon’s strength in Prime,which is currently available in 22 countries, continued to be the key catalyst.

Strong Prime Day performance across 20 countries contributed well to the second-quarter results of the company.

Growing momentum across Business Prime, which currently caters to more than1 million business customers of all sizes across the world, remained a positive.

We note that Prime Video streamed the returning seasons of its original series and specials like THEM, Solos, The Underground Railroad, Panic, Flack, My Life, Bosch and the Prime Day Show.

AWS, which witnessed strong growth in the topline, continued to gain customer momentum in the second quarter, courtesy of its highly reliable services portfolio.

Amazon Location Service, which makes the addition of location functionality seamless, was made generally available.

On the heels of the expanding services portfolio, regions and Availability Zones, AWS experienced strong growth in its clientele with the addition of BMO Financial Group, which selected AWS as its preferred and strategic cloud provider. AWS was also selected by Swisscom as the preferred public cloud provider.

Ferrari selected AWS as its official cloud, Machine Learning, and AI provider. In addition to this, Bell Canada and Bancolombia were added to the AWS clientele.

Apart from this, Ring made the Floodlight Cam Wired Pro available to the customers in the reported quarter.

Additionally, advancing the skills and features of Alexa helped the company in winning deals in the reported quarter.

Operating expenses were $105.4 billion, up 26.9% from the year-ago quarter. As a percentage of revenues, the figure contracted 20 basis points (bps) on a year-over-year basis to 93.2%.

The company generated $12.7 billion incash from operation in the second quarter, which increased from $4.2 billion in the prior quarter.

For third-quarter 2021, Amazon expects net sales between $106 billion and $112 billion. The figure is anticipated to improve 10-16% on a year-over-year basis. The Zacks Consensus Estimate for net sales is pegged at $119.25 billion.

Income from operational activities is likely to be between$2.5 billion and$6 billion.

The guidance is inclusive of $1 billion costs related to COVID-19.

Long-term earnings growth rates for AutoNation, Booking Holdings and Revolve are pegged at 20.16%, 16.5% and 14.93%, respectively.